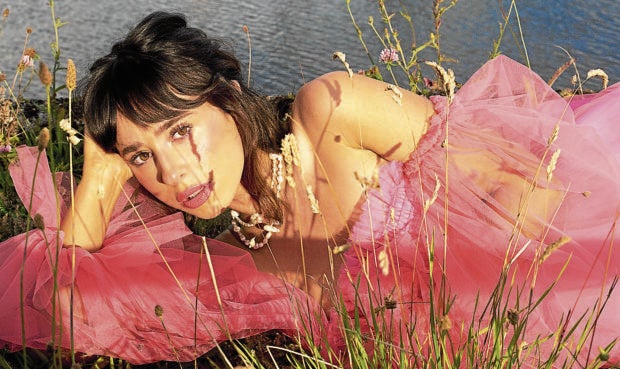 Bringing hope in sadness. That, according to singer-songwriter Foxes, is what most of her dance hits is all about when we asked the 32-year-old Grammy-winning recording artist why she’s partial to dance music laced with intimate themes of heartbreak and melancholy. The brand-new single “Dance Magic,” which tackles a toxic relationship, immediately comes to mind.

During a recent one-on-one interview, we told the lovely British singer how listening to “Sister Ray” and “Sky Love”—tracks from her upcoming third studio album “The Kick,” set for release on Feb. 11—has instantly given us, yes, a kick and an invigorating boost at a time when we’re often thrust into lockdowns and periods of isolation.

“It’s funny you should say that because I was just talking to someone in another interview about this,” she told Inquirer Entertainment when we pointed out how she often incorporates irresistible, groove-heavy arrangements with gloomy themes.

“A good number of my songs start off with a very emotive skeleton of what the record will be. There’s really a lot of sadness in my music … it’s very personal.

“There are two ways of looking at it. It’s something that I really like to do—writing music from quite a deep, dark personal place. Then, putting hopeful, sonic music over the top, which I think can bring a sliver of hope in sadness.

“So, there’s that … which I love doing. But I will also say that, as I’ve written three records now (2014’s “Glorious,” 2016’s “All I Need” and next month’s “The Kick”), I am at a point where I sometimes feel like people don’t always hear the lyrics, because there’s a lot of dance music going on around them.

“But I personally love singing the more stripped-back versions of my songs—and that’s something that I think will probably evolve in the future.”

After mentioning in passing how thrilled a lawyer friend of ours reacted when we told her about our upcoming chat with Foxes on Zoom, we also “suggested” that perhaps the 32-year-old singer could also include those stripped-back versions, along with her gorgeous ballads (“Woman,” “Hollywood”), in her repertoire if she finally gets to serenade her fans in a concert in the Philippines.

“Oh, I would absolutely love to!” she quipped. “Honestly, I love how music can connect you to people around the world. It’s just one of the most magical things, isn’t it? Regardless of where we are, there’s always music to connect us! I’ve always been fascinated that even people in the Philippines listened to me.”

And why not? After all, hers is the voice that helped turn “Clarity,” her collaboration with Zedd, into a Billboard Hot 100-charting global hit. As if that isn’t impressive enough, Foxes has also worked with some of the biggest names in pop music, like Coldplay, Pharrell Williams and Zedd.

Our Q&A with Foxes:

I’ve been dancing to your music for the past couple of days now, as I listened to your new music after your four-year hiatus and revisited the early ones. I feel like they’re a bundle of musical energy just waiting to break free. How different will “The Kick” be from “Glorious” and “All I Need”? How has your music evolved from each of them?

Well, it’s the perfect activity to stay positive and sane during lockdowns, don’t you think?

Yeah, it’s a sign of the times. I mean, that’s actually a good point, because that’s what makes this record different. We were so trapped in our own bodies, right? I felt like we needed to be able to get this energy out of us. So, a lot of the music on “The Kick” is referring to getting out dancing again, being free and letting go.

I remember writing a lot of it in my kitchen, just dancing (laughs) … and writing these melodies on my voice notes. I wrote the record out of an almost desperate need to be back socializing. So, it’s got a lot of energy. I can’t wait till the whole world opens up again, so we can dance and get together again.

Your fans relate to your music according to the different ways the lyrics resonate with them. What’s even more wonderful about music is how open it becomes to listeners’ interpretation, right?

Yeah, that’s so true. I always love how people interpret the music—like, they say it back to me and I’m like, “Oh my God, it wasn’t about that at all (laughs)!” It’s so funny because a lot of the music could be about mental health or heartbreak or anything. But what I love about it is that someone can take a lyric or a line and turn it into something that means a lot to them on a personal level. It’s just wild.

You described your four-year break from the music industry as “a period of growth and reflection.” I think that was a brave move, because not a lot of pop acts would risk their careers by staying out of the limelight that long. What did you find empowering or invigorating about that hiatus?

I know it sounds silly to say, but I don’t really think I was a pop act. I wrote the first album in a bedroom. I put some songs out on SoundCloud and recorded “Clarity” with Zedd, but it wasn’t ever about like reaching the stars or superstardom or being this perfect bubblegum pop girl.

What happened was, I just needed to pause it because I was like, “Am I actually happy like this?” So many people would just love this career. But I needed to make sure that, while I was writing from an authentic place, I was also still loving it.

Yeah, it was a brave move and there was a part of me that was like, “If I do this, I probably might not be able to come back from it.” But sometimes, you have to make those moves because, for me, it’s more about the art you’re making, rather than the popularity you’re creating.

There’s a part of me that’s saying, “I probably could be a lot bigger now [if I didn’t take a break].” But it’s also nice because the pressure’s been taken off, and I feel like I’m now writing songs that really feel real—they’re coming from a place that’s where I was originally at. It also allowed me to go off exploring different sounds and different ways of writing. I learned to put different sounds together.

Did winning a Grammy put a lot of pressure on you?

Yeah, that’s exactly it—it did. That was when I was like, “Oh, wait a minute. I’ve just been writing in a bedroom, and I’m suddenly in LA holding a Grammy! I don’t really know how to deal with this!”

What ended up happening was, the major label I was with put me in a box as a pop act. And there were quite a few years where I felt like I didn’t fit the shape of it: I was trying to be the thing I wasn’t!

But as much as I was so grateful for those incredible opportunities, there was also just a lot of stress trying to be this perfect pop singer, recording singles that fit the mold—which I did for many years. But then, that didn’t really sit well with me.

Yeah, they were amazing experiences. It was incredible to work with Zedd or Pharrell—after all, these are bucket-list things I put up [on] my vision board. But maybe I’m more of an introvert than I realized. So, when I actually got there and was supposed to live up to the expectations of it, it was harder for me. INQ