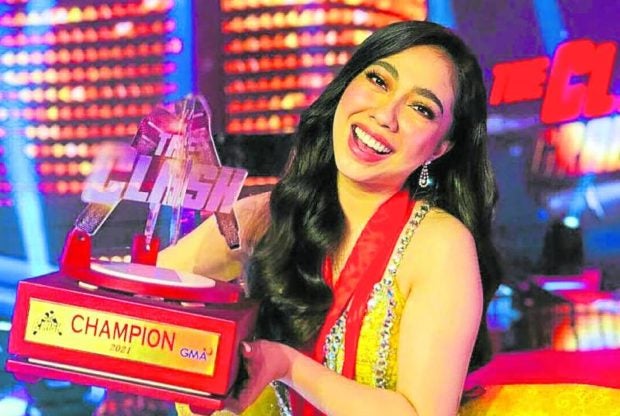 On the days leading to the grand finals of “The Clash” Season 4, contestant Mariane Osabel asked for a sign. Out of the blue, her elder brother told her: “You will win. Trust me.”

“I was like, ‘Don’t say that! You might jinx it. It might not happen and I will only get hurt. But he really meant it. And he kept repeating it over and over: ‘You will win. Trust me,’” Mariane said in a recent virtual conference.

The words of her brother, whom she fondly calls Kuya Arne, unwittingly lifted her confidence as she headed into the finals last December. True enough, she ended up winning the competition, besting finalist Vilmark Viray in the one-on-one, where they interpreted original compositions from the “The Clash 2021 Songwriting Contest.”

The 23-year-old belter’s powerful performance of Harish Joya’s pop ballad “Bakit Mahal Pa Rin Kita” earned her the title and with it, P1 million cash, a house and lot, and an exclusive management contract with GMA 7.

“My brother’s encouraging message stuck with me until I was performing. It was at the back of my head. I told myself that nothing good will happen if I let nerves get the better of me,” said the singer, who hails from Iligan City. “But regardless of the result, I would have still been thankful for the experiences. Winning was just a bonus.”

Mariane’s victory was made even sweeter by the fact that her Kuya Arne—who was also once an aspiring singer and kontesero—was able to witness her fulfill her dreams, after a health scare last year.

“He’s 17 years older than me. So I was just a little kid when he started participating in contests. And seeing him made me think that I wanted to be a singer, too. He’s my very first mentor in music. He pushed me … told me I could do it,” she said. “He underwent a kidney transplant last year and was in critical condition.”

“We almost lost hope, but we kept on praying, and Kuya Arne got better. And it felt like I had witnessed a miracle,” Mariane added. “That’s one of the things I’m thankful for.”

With her prize money, Mariane promised to help her parents and brother, who’s on maintenance medication. She also intends to make a donation and hold a virtual fundraising concert for the survivors of Typhoon “Odette” (international name: Rai). “I would like to work with my fellow ‘The Clash’ contestants for this cause,” she said. “I have already talked to them and they’re all willing to do it with me.”

Mariane had joined countless singing competitions prior to “The Clash.” While she won most of them, the losses were enough to sow doubt in her. “Sometimes, I would find myself looking back at my losses and painful experiences. And for a while, I got a little scared of trying again. I almost gave up and thought that singing may not be for me,” she admitted.

But later on, Mariane, whose singing style was inspired by soul and R&B singers like Whitney Houston and Jennifer Hudson, realized that the losses and disappointments only made her stronger and prepared her for her big moment.

“I remember Miss Lani Misalucha (one of the judges) telling me that I’m like a wall that will be hard to bring down. And that’s true. I have been in so many contests, but I tried and tried till I found success. In the end, these walls will turn into a castle,” she said. “Winning ‘The Clash’ made me feel that all my struggles were worth it.” INQ