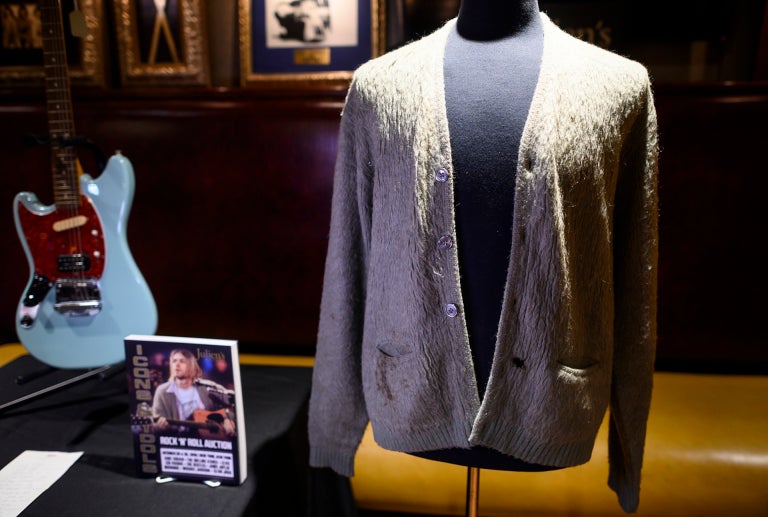 Kurt Cobain’s cardigan from Nirvana’s 1993 MTV Unplugged performance is on display at the Hard Rock Cafe in New York City ahead of the auction of Julien’s Auctions on Oct. 21, 2019 in New York City. Image: AFP/Johannes Eisele

A quarter century after grunge’s enigmatic rhapsodist took his own life, Kurt Cobain’s iconic cigarette-singed cardigan worn during Nirvana’s 1993 “Unplugged” performance is up for sale.

The tattered, drab olive green button-up sweater with dark stains and a burn hole could go for at least $200,000 to $300,000 (P10 million to P15 million), according to pre-bidding estimates from Julien’s Auctions, which says rock and roll memorabilia has become a major investor’s market.

The thrifted cardigan is the toast of this fall’s “Icons & Idols: Rock ‘N’ Roll” auction organized by the house, which will also sell off the late Nirvana frontman’s left-handed teal Fender Mustang guitar played during the “In Utero” tour.

“This cardigan, it’s the holy grail of any article of clothing that he ever wore,” said Darren Julien, CEO and president of the house.

“Kurt created the grunge look; he didn’t wear show clothes,” Julien told AFP at a New York exhibition preview of the auction, which will kick off Oct. 25 and run through Oct. 26, with bidding in person and online.

Cobain’s haunting “Unplugged” performance with Nirvana, recorded less than six months before his suicide at age 27, is considered one of the most iconic shows of the series, and was released posthumously.

Already deep into an emotional, drug-addled downward spiral, the depressive but singular talent with ocean-blue eyes reportedly lamented to “Unplugged” programmer Amy Finnerty after the set that the audience seemed not to like the show.

“Kurt,” she told him, “they think you are Jesus Christ.”

It is the second time the Manhattan-brand sweater has gone up for auction, having sold in November 2015 for $137,500 (P7 million) via Julien’s.

The house’s CEO said interest in the rock and roll market has seen a particular uptick in recent years, as the genre ages and its memorabilia becomes artifact.

“I’ve always said that the rock and roll market is the new fine art market,” Julien said. “Millennials are starting to collect, and they’re not collecting Monets and Picassos.”

“Wall Street guys” are among the major buyers, Julien said, adding that “hedge funds even are starting to invest in rock and roll artifacts as a way to diversify their client’s portfolios.”

A paper plate Cobain had eaten pizza off of, and then written a Nirvana set list on for a performance at Washington’s intimate 9:30 club, earlier this year went for $22,400 (P1.1 million), as another of his cardigans worn at one of his final photo shoots sold for over $75,000 (P3.8 million).

Other items from the more than 700-strong collection hitting the auction block this weekend include Michael Jackson’s bejeweled custom velvet jacket which the late pop star donned at Elizabeth Taylor’s 65th birthday party.

Guitars belonging to Elvis Presley, Madonna and Paul McCartney will be up for purchase, as well as handwritten lyrics to classics such as Eric Clapton’s “Layla” and Bob Dylan’s “Mr. Tambourine Man”.

Also on sale is a surrealist watch given from McCartney to one of his sound engineers, who helped dispel 1969 gossip that the Beatle had died.

“Thanks for your help in squashing the old rumor that Paul is dead,” reads a note accompanying the watch, signed by McCartney, now 77, and his late wife Linda.

“Paul is Live with boots on!” JB

U2 live in Manila for the very first time