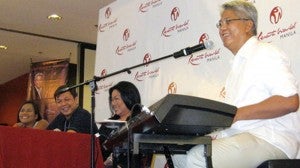 MR C is proud of all 14 Philpop finalists.

The local record industry may be in dire straits, but it doesn’t mean musicians are losing interest in writing new songs. Certain quarters are, in fact, helping stimulate creativity by organizing events that entice songwriters to bring out their works.

At the center of these efforts is composer Ryan Cayabyab, who has been tapped by concerned sectors to get involved in three projects aimed to discover new talents.

The finals of the 1st KBP (Kapisanan ng mga Brodkaster ng Pilipinas) Pop Music Festival, held recently at the Star Theater of the Star City Complex in Pasay, had 11 young composer finalists (out of thousands of entries) who vied for the grand prize.

Cayabyab headed the panel of judges.

The winning song, “Lead the Way,” stood out for its spiritually inspiring sentiments laid out on a hook-filled, hip-hop groove. The composers, Q-York and Kat Lopez, who also performed their song, were said to have written it after listening to Gary Valenciano’s talk during the 1st Elements National Songwriting Camp in Dumaguete, Negros Oriental.

Speaking of Elements, the annual music camp (held every November) ushered in 2012 by launching Radio Republic, an online radio station (radiorepublic.com.ph) with an all-Filipino music programming.

If things go on as planned, this year’s Elements will feature a grand music festival in Dumaguete.

The people behind Elements are businessman Jun Sy, former record label executive Twinky Lagdameo, and Cayabyab. They have formed a company, 7101 Music Nation, as their pledge of commitment to help revitalize Pinoy music.

Just last week, Cayabyab presided over the screening of entries to the 1st Philippine Popular Music Festival (Philpop), a new songwriting competition in search of new blood that will represent the sound of today’s generation. A project of Maynilad, whose executives said the company is in it for the long haul, Philpop is offering a grand prize of P1 million.

Over 3,000 aspiring and veteran composers submitted entries. A group of more than 100 judges—composed of record executives and producers, radio DJs, music critics, musicians and composers—spent six days in several function rooms at Resorts World Manila’s Remington Hotel listening to the entries, which were trimmed down to 14 finalists.

“Minsa’y Isang Bansa” and “Bigtime” were written by veteran, multi-awarded composers. The Inquirer—we were invited to help screen the entries—believes they have the strongest chances of emerging as the winner.

But all 14 finalists have a shot at it, needless to say, because they offer refreshing takes on universal themes and experiment with a variety of music genres.

Especially noteworthy are the inventiveness and humor in “Kesa,” “Takusa” and “Negastar.” 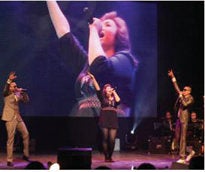 Cayabyab told the Inquirer: “I’m excited about all the top 14 songs. There are about 10 more that are worthy of inclusion—ganun kagaganda ang mga nilikhang kanta para sa Philpop. But the mix of the top 14 is great. I’m proud to present them in the finals.”

Finals night is on July 14 at the Philippine International Convention Center (PICC) in Pasay.

The top 14 will be recorded in an album to be distributed by Curve, a new local indie label.