Persistence does pay off | Inquirer Entertainment

Persistence does pay off 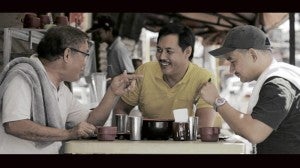 Three months after it was disqualified from competing at the annual Cinemalaya Philippine Independent Film Festival, director Emerson Reyes announced that it’s a wrap for his controversial full-length feature “MNL 143.”

Reyes said “MNL 143” will have its world premiere at the Edinburgh International Film Festival in Scotland, to be held from June 20 to July 1. As an added treat, it will have a special screening on July 7 at the UP Film Institute in Diliman, Quezon City.

“The production team was very pleased,” Reyes told the Inquirer. “All the hard work, the sleepless nights have paid off. I’m lucky to have worked with a team that’s as passionate as I am,”

“MNL 143” is a black comedy about an overseas Filipino worker who, upon his return, works as an FX cab driver. He meets interesting characters while trying to find his lost love.

The film made news when Cinemalaya organizers barred it from competing in the New Breed category because of casting disagreements with its producers. Festival bosses reportedly did not think actor Alan Paule and Joy Viado should play the lead roles.

“Once we began filming, I stopped thinking about the controversy. My goal was to finish it and grab opportunities to screen abroad,” Reyes said. “I believe in the material. I worked on it as much as I did on my other short films… I simply enjoyed the shoot.”

In any case, Reyes said, he learned a lot from the experience. “I now know who my true friends were. I’m grateful to them—sumabay sila sa biyahe ko without expecting any financial gain.”

The film runs for 90 minutes. Reyes said he wrote the story while attending a scriptwriting workshop by Armado “Bing” Lao in 2011.

“The six-day workshop was in Quezon City. I was still living in Manila at the time. Since I wasn’t familiar with Quezon City, I took a cab—a ride that cost me P600. I thought it would be extremely costly if I kept riding a cab, so I tried commuting by FX.”

It was during these trips that Reyes got to study passengers’ different personalities. “I eavesdropped; sometimes, I peeked at the text messages they were sending. I realized that each one had different stories to tell. I was able to create solid characters.”

The filmmaker has won various awards for his works. “Walang Katapusang Kwarto” was the 2011 Cinemalaya winner of best short film, best screenplay and audience choice awards. It was screened at the 15th Thai Short Film and Video Festival in Bangkok.

The surrealist “Telenovela ni Juan at Luzviminda,” and animation feature, “Ebolusyon ni Kasalanan,” represented the country at the 12th TBS Digicon Regional Awards in Tokyo in November 2010. A year earlier, “Ebolusyon” won first prize in the experimental category of the 21st Gawad CCP for Alternative Film and Video, and the 180 Microcinema Film Festival.

Reyes directed the documentary “Neo-Rebolusyon,” which was funded by National Commission for Culture and the Arts in cooperation with Goethe Institut, Independent Filmmakers Cooperative and De La Salle-College of St. Benilde.

The filmmaker Reyes is now father to newborn Blaze Rohkein Reyes. His wife, Batangas radio DJ Ninay Lescano, gave birth on May 9. “Blaze is really my focus right now,” said Reyes. “I try to stay at home as often as possible these days.”

When not babysitting, he works on his next full-length project, which he said is open to partnership with a foreign producer.

Asked whether he’d join Cinemalaya next year, the director said: “Not until I see changes in the operations. Nakakaraos naman ako kahit papaano. It has been months, and we’re all still waiting for its organizers to, in the very least, come up with a formal statement about the changes they’ve promised.”