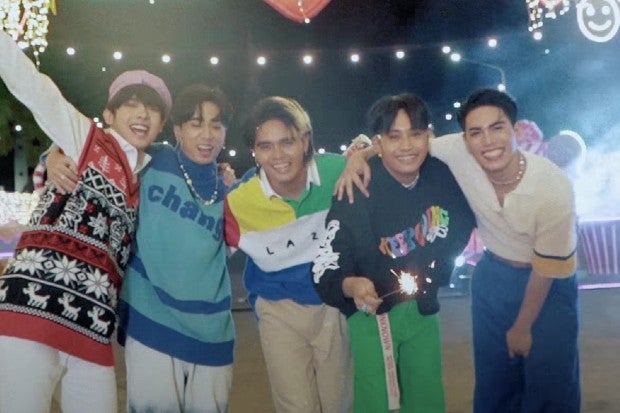 Boyband SB19 is spreading the Christmas cheer to their fans with the release of the official music video of their song “Ligaya.”

The P-pop group premiered the vibrant music video on their YouTube page last Saturday, Dec. 18. It was filmed on a local mall’s holiday display, which had “love,” “hope” and “shine” neon signs hanging on arches, a candy wonderland set, and a Santa Claus figure that the band interacted with while singing.

Band member John Paulo Nase penned the holiday track, which the band debuted in their third year anniversary concert last November. The music video, meanwhile, was directed by Rose Lope, who also worked with the band on their recent performance of the hit song “Mapa” for Sonik Philippines 2021.

The video sits at the 13th spot of YouTube Philippines’ trending list for music, as of writing.

Sb19 recently made headlines for their upbeat song “Bazinga,” which dethroned “Butter” from K-pop sensation BTS on Billboard’s Hot Trending Songs chart earlier this month. The Korean boyband has since reclaimed the top spot, following the release of “Butter (Holiday Remix).”

Comprised of members Josh, Ken, Pablo, Stell and Justin, SB19 has also been promoting “Our Zone: Replay,” an online stream of their two-day anniversary concert “Our Zone” on Dec. 25 and 26. The two concerts were first held via livestream on Nov. 27 and Nov. 28 this year. JB