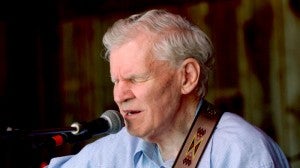 In this May 1, 2005 photo, master flatpicker Doc Watson plays during the "My Friend Merle" show during MerleFest in Wilkesboro, N.C. Watson was in critical condition Thursday, May 24, 2012 at a North Carolina hospital after falling at his home in Deep Gap earlier this week. AP/The Winston-Salem Journal, Lauren Carroll

Agent Mitch Greenhill of Folklore Productions said in an email Friday that Watson is resting and responsive following the surgery Thursday at Baptist Hospital in Winston-Salem. A hospital spokeswoman said he remained in critical condition Friday afternoon.

The blind singer and guitarist has won several Grammys, including a lifetime achievement award. He also received the National Medal of the Arts.

He’s known as a master of the flatpicking style of guitar playing, He also started Merlefest, an annual gathering of musicians in Wilkesboro named after his son, who died in a tractor accident in 1985.