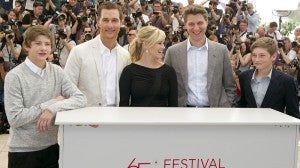 CANNES, France — To have one film competing at the Cannes Film Festival is a privilege. To have two, Matthew McConaughey says, is wonderful good fortune — and the reward for a spell of hard labor in the trenches of independent cinema.

In Lee Daniels’ steamy Southern noir “The Paperboy,” McConaughey plays a journalist who returns to his Florida hometown to investigate a murder.

In Jeff Nichols’ “Mud,” which screened Saturday as the festival’s final competition entry, he is a story-spinning fugitive holed up on an island in the Mississippi who is befriended by two local boys.

McConaughey laughs when asked if having two movies competing for the Palme d’Or gives him divided loyalties.

“That would be a high-class problem,” he said. “I’m really, really endeared to both of them for different reasons — and they’re very, very different from each other.

The two films take the Texas-born actor on a tour of the U.S. South — and of men on society’s margins.

In “The Paperboy,” McConaughey’s Ward James is a crusading reporter with dark depths to his psyche that imperil his quest for the truth.

His title character in “Mud” is being hunted as a dangerous fugitive, but may be a wild innocent driven by love.

Critics have hailed McConaughey’s turn in “Mud,” and director Daniels said he was wowed by McConaughey’s nuanced performance in “The Paperboy.”

“I’m so happy that he’s so understated in the film,” Daniels said. “There were moments when I didn’t recognize Matthew.” 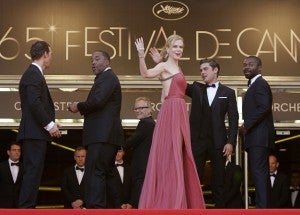 WITH “THE PAPERBOY” GROUP From left, Matthew McConaughey, director Lee Daniels, actors Nicole Kidman, Zac Efron and David Oyelowo arrive for the screening of “The Paperboy” at the 65th international film festival, in Cannes, southern France, Thursday, May 24, 2012. AP/Francois Mori

McConaughey said the roles were the result of a decision to “shake things up” in a career that has seen him take leads in a mixed bag of romcoms (“Failure to Launch,” ”Fool’s Gold”) — and, as he noted at Cannes, play lots of lawyers, in films from “A Time to Kill” to “The Lincoln Lawyer.”

“I was looking for some characters that didn’t necessarily pander to convention, or even didn’t pander to plot,” he said, long legs stretched out on a sofa in a Cannes hotel. “They’re all kind of characters that live on the fringe, on the outskirts of society. But they’re really human characters.

“What I was really looking for is some things where I could hang my hat and be the architect of my man, and it’s based on humanity and reality. It’s not based on morality or on good or bad or right and wrong.”

That’s where the similarities end between his two Cannes films. “The Paperboy” takes a Pete Dexter crime novel and mixes in director Daniels’ fascination with shifting sexual and racial allegiances.

In “Mud,” Arkansas-born director Nichols creates an affecting coming-of-age story with echoes of Mark Twain, rooted in the landscape of his home state.

“Lee is very different from Jeff Nichols,” McConaughey said. “Lee’s not a linear thinker at all. Jeff Nichols was very linear — he wrote the script, wrote each word on purpose, and would be editing in his head after he thought he’d got his take.

“Lee grabbed this book but created his own world.”

McConaughey’s Cannes double-header is the product of remarkable year of work that saw him shoot five independent films with strikingly different directors.

As well as “The Paperboy” and “Mud,” he was a sheriff in Richard Linklater’s dark comedy “Bernie,” a club owner in Steven Soderbergh’s male-stripper movie “Magic Mike” and a hitman in William Friedkin’s thriller “Killer Joe.”

The 42-year-old actor has never been busier — or, it seems, happier.

“I fired out of bed every morning so excited, and a little scared about going to work, but excited to go and get into it,” he said. “I love the energy of an independent film. Time is so precious. There’s no go-back-to-the-trailer time. It’s a very vital experience, and I like that.”

It was also an education in modern American cinema from five filmmakers with strong personal styles.

“With Linklater — this was our third time working together. We do all this character work together. … We have a shorthand together.”

McConaughey will find out Sunday, when the film festival wraps up, whether either of his Cannes films has taken a prize.

Next up, he hopes, is “The Dallas Buyers’ Club,” a drama based on a true story about illegal AIDS drugs in the 1980s that he’s long sought to make with director Jean-Marc Vallee.

“I never had a rule on what to do, just keep trying to do different things,” he said. “But it’s got to be more than that. I was instinctually drawn to this kind of material where I was not necessarily drawn to some other comedies or things that I’ve done in the past.

“I’m more fulfilled with the work probably than I’ve ever been, and more turned on by it, and I hope that continues.”