The music of 'West Side Story,' from Bernstein to Metallica | Inquirer Entertainment
Close
menu
search

The music of ‘West Side Story,’ from Bernstein to Metallica 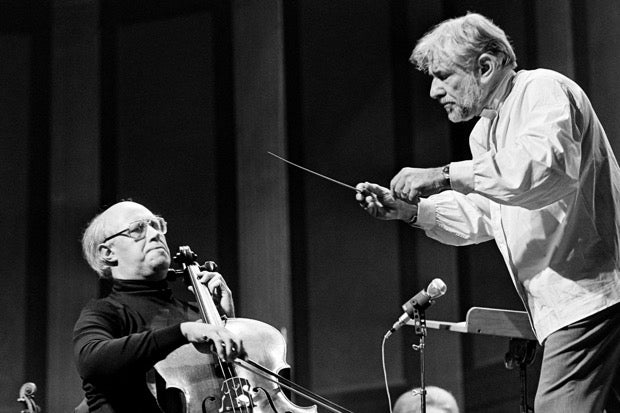 In this file photo taken on Nov. 8, 1976 Russian cellist Mstislav Rostropovitch (L) performs during a rehearsal conducted by US conductor Leonard Bernstein (R) at the Champs Elysees theatre in Paris. Image: AFP/STF

Leonard Bernstein’s score for “West Side Story” has become so ubiquitous in Western culture that it has popped up in such unlikely places as Metallica and Wu-Tang Clan albums.

The original play first appeared on Broadway in 1957, before transferring to the silver screen in 1961, and early reviews suggest that Steven Spielberg’s new film version proves the music still resonates today.

Three decades after its appearance, Metallica used a clip from one of its biggest tunes, “America,” as the surprise intro to “Don’t Tread On Me” on their seminal “Black Album.”

One of the pioneers of hard rock, Alice Cooper, also mined the musical for inspiration on his “Gutter Cat vs The Jets” in 1972, using the theme song from one of the rival gangs in the story.

The inclusions were less obvious when it came to the Wu-Tang Clan sampling elements for “Maria” in 1997, from the song of the same name in “West Side Story.”

Wu-Tang Clan’s lyrics over the sample — “Knew this bitch named Traj, she had a hella fine ashcan ass” — seem rather distant from the vibe of the original, though that only emphasizes how deeply the musical had embedded itself in American culture.

Bernstein, who died in 1990, had not expected the score to have such a long life.

Having never actually conducted his own score — either for the stage or screen versions — he was invited to re-record it with opera singers in 1984.

“In the documentary about the recording, you can hear him saying that he thought it would have aged badly, but it hadn’t at all,” said Laurent Valiere, host of a new podcast about the movie.

“The music of ‘West Side Story’ transcends classical music, with elements of jazz, be-bop and Latin rhythms,” he added.

Although the operatic recording went down as a classic of the genre, it was a fraught process, with Bernstein famously throwing a tantrum at Spanish star tenor Jose Carreras as he struggled with the pronunciation and pacing of playing the all-American Tony.

The irascible Bernstein, who was head of the New York Philharmonic by then, also grew tired of constantly being reminded of his most famous work.

“It became a sort of albatross around his neck,” his daughter told Britain’s Radio Times. “He had to work all the harder to get people to focus on his other works, especially his symphonic works.”

The idea for “West Side Story” supposedly came about when Bernstein and playwright Arthur Laurents were sat around a pool in Hollywood and came across a newspaper story about gang warfare.

It struck them as the perfect framing for the updating of “Romeo and Juliet” that they had been searching for.

The racial element — with the Puerto Rican Sharks taunted by the white Jets – resonated with Bernstein, who had struggled through anti-Semitism as a younger man.

The Puerto Rican element also allowed him to introduce a mambo — which gives the score a “hyper-contemporary” feel, said Valiere. AP/JB