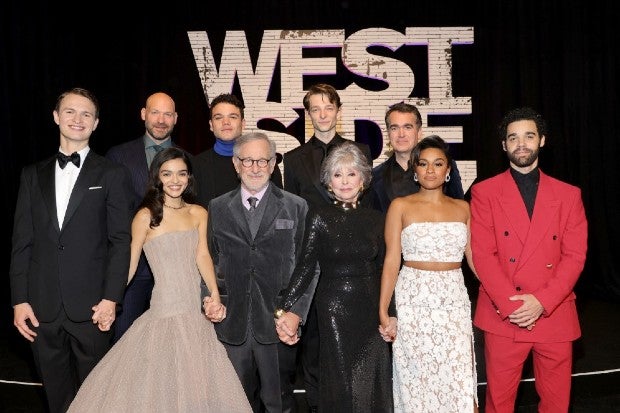 For Steven Spielberg, who grew up obsessed with “West Side Story” and its legendary soundtrack, the excitement when rehearsals began for his own version were almost more than he could handle.

“I did jump out of my chair, singing out of key and dancing like I had three left feet,” he told a press conference this week. “This was the most delightful family affair I’ve had since E.T.”

The tragic love story of Tony and Maria — set against racially charged gang rivalry in New York — has been an American cultural milestone since it first appeared on Broadway in 1957 and as a film four years later.

Spielberg’s dazzling $100-million remake, released globally next week, is an act of homage that also seeks to highlight the political messages at the heart of the story.

The gangs — the Puerto Rican Sharks and white Jets — are “really fighting about race,” the 74-year-old director said.

“But the territory they’re claiming to be warring about is all under the shadow of the wrecking ball,” he added, referring to the way that working-class areas of New York were being bulldozed at the time for large-scale development projects.

Right from its first appearances on Broadway, some in the Puerto Rican community have taken issue with their depiction in “West Side Story.”

Certain changes were inevitable for a modern remake — not least ensuring that none of the Latino parts were played by white actors.

But screenwriter Tony Kushner defended the originals, which he said were “incredibly radical” for the time.

“I firmly believe that [the Broadway show and 1961 film] represent enormous strides forward in terms of representation,” Kushner said, even if they were “not perfect in any way.”

Spielberg also refused to subtitle Spanish parts of dialogue “out of respect.”

“The language had to exist in equal proportion alongside the English,” he said.

The team never considered moving the action into the present day — mostly because the lyrics by Stephen Sondheim, who died last month aged 91 but was closely involved in the production, were written in the language of 1950s youths.

“There’s nothing dated about the score at all,” said Kushner. “But it would have felt odd to have those songs transposed into 2021.”

“It’s political and more so than the original,” agreed actress Rita Moreno, who is the one person with a direct link to both.

Moreno became the first Latin American actress to win an Oscar for her role as Anita in the first film version (one of 10 Academy Awards it picked up).

Now 89, she was brought in by Spielberg to play the role of Doc’s widow this time (one of the few changes to the story since the part did not exist in previous versions).

She admitted it was psychologically challenging.

“I’m not going to say I wasn’t envious — that would be a bloody lie,” she said. “I wished I could be that young again and do it again. But I got this beautifully written part. I love me in this movie.”

She added that filming her one scene with Anita was “creepy.”

“I just kept looking at her and had the toughest time getting inside the scene. It was very strange.”

The film was shot on the streets of New York before the COVID-19 pandemic, with Spielberg keen to avoid too much digital work.

They were helped by the fact that “the city of 70 years ago still exists in certain boroughs,” he said.

But some digital effects were needed to remove air-conditioning units, satellite dishes and sweat — because they filmed the biggest number of all, “America,” in the midst of a heatwave in Harlem.

“The kids were working so hard, they were sweating through the costumes,” said Spielberg. “Through the magic of digital technology… we took out a lot of sweat in post-production.” SM/JB