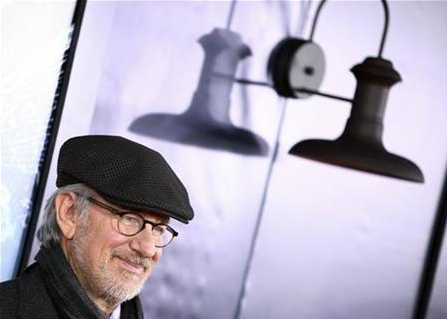 Director Steven Spielberg arrives for the premiere of the movie “The Adventures of Tintin” in New York, Dec. 11, 2011. Image: Reuters/Carlo Allegri

LOS ANGELES — Directing his first musical, Spielberg moves into the big roomy space of a Broadway-meets-Hollywood classic, rearranges the furniture (the film’s screenwriter, Tony Kushner, has spiced up the dialog and tossed out the most cringe-worthy knickknacks), and gives it all a fresh coat of desaturated, bombed-out-city-block, gritty-as-reality paint. He makes it his own.

At the same time, Spielberg stays reverently true to what generations have loved about “West Side Story”: the swoon factor, the yearning beauty of those songs, the hypnotic jackknife ballet of 1950s delinquents dancing out their aggression on the New York streets.

According to a review by Oweb Glieberman for Variety, there are scenes in Spielberg‘s version that will melt you, scenes that will make your pulse race, and scenes where you simply sit back and revel in the big-spirited grandeur of it all:

The setting is Hell’s Kitchen in 1957, something the film lets us know with a wink that nods to how Spielberg and Kushner are going to tinker with the material. Robert Wise’s 1961 screen version opened with that God’s-eye panoramic sweep of Manhattan, but Spielberg‘s opens with a panorama of rubble, the camera swooping over what looks like a war zone, which turns out to be the wrecking-ball “slum clearance” that will make way for the construction of Lincoln Center. The turf war between the film’s white and Puerto Rican teenage gangs, the Jets and the Sharks, now has a bigger-picture backdrop. Both are being crushed by gentrification — which is to say, part of their tragic folly is they never realize they’re in the same boat.

The Jets start off slathering paint on the mural of a Puerto Rican flag. As the boys move and groove to their inner thug, singing “Jet Song” (“When you’re a Jet you’re a Jet all the way…”), Justin Peck’s choreography plays off the hypnotic, limb-thrusting, rhythm-of-the-city athleticism of Jerome Robbins’ original dances, and Spielberg, working with his dynamic cinematographer Janusz Kaminski, has the camera moves to match.

We seem to be gliding through the streets right along with the Jets, channeling their reckless exhilaration, and the ’50s-punk acting has been liberated so that the snarls and struts aren’t trapped in that bubble. (The 1961 “West Side Story” felt dated… in 1961.)

As Riff, the leader of the Jets, Mike Faist has a lean sociopathic squint, and David Alvarez plays Bernardo, leader of the Sharks, with a mean swagger of self-righteousness. Bernardo is now a boxer (fighting is what gets him high), and his problem is that he has never embraced his life in America. The racial antagonism he faces each day has singed his soul, and Alvarez infuses the character with a dark-side-of-rock-star bravado.

Of course, at the center of “West Side Story” is something — maybe I should say “Somewhere” — softer and more tenderly lyrical. And Spielberg has done an ace job of casting his two romantic leads. Before now, I’ve never been a fan of Ansel Elgort. One’s first thought about him may be that he’s Ashton Kutcher without irony — and that you miss the irony. But in “West Side Story,” Elgort, with lips like Brando’s, has a brooding heart and personality that pop, and he’s a wonderfully expressive crooner. Tony, updated by Kushner’s script, has now spent a year in prison for nearly punching someone to death, and Elgort, speaking in understated street vowels, strikes just the right balance of sweetness and danger.

At the high-school dance, which Spielberg stages with a hip-twirling electricity that rivals the big school dance number in “Grease” (yes, that’s a compliment), Tony has his first glimpse of Maria (Rachel Zegler), the girl who will burn down what’s left of his gang loyalty, and she has her first glimpse of him, and… well, it could all spearhead a revival of love at first sight. Singing “Maria,” his voice soaring into the upper register, Tony is transported, and so are we.

In the Oscar-winning 1961 film version, adapted from the 1957 Broadway show, Maria was mostly a perky, saintly innocent, but here she gets a spitfire upgrade. The charismatic newcomer Rachel Zegler gives her a touch of fierceness and a boldly chiseled stare of longing.

When Maria and Tony sing “Tonight,” the most transcendent song in “West Side Story,” they’re on the fire escape, in vintage Romeo-and-Juliet-of-the-tenement fashion, and Spielberg stages their duet with an intimate choreographed flow, so that the words seem to spin and dance. Their love is an oasis of hope in the concrete jungle. And that’s an emblem of how “West Side Story” now lands in the larger movie world: as a heady nostalgic crowd-pleaser that offers the rare alternative to both blockbuster overkill and indie angst. Can the Oscars possibly say no to it?

That said, I’ve always had a love/gripe relationship with “West Side Story.” It has what may be the greatest set of songs in any American musical, composed by Leonard Bernstein as if he were the magic link between Richard Rodgers and Brian Wilson. The lyrics, by the late Stephen Sondheim, are as peerlessly playful as they are poetic, and the choreography remains a marvel of expressionistic street movement.

For me, though, the original film version goes off the rails during the big rumble. I could never buy that Richard Beymer’s Tony would pick up that switchblade and do what he does. And Natalie Wood’s Maria gets angry at Tony for killing her brother for about five seconds, before she seems to forget all about it.

There’s an unconscious racist element to that (quite apart from the regrettable decision to cast Natalie Wood as the Latina Maria), and it gums up the emotional flow. The unintentional subtext seems to be: Bernardo was a Latino hothead, so his death doesn’t even matter to Maria all that much. “West Side Story” may owe its story to Shakespeare, but that doesn’t mean it parses. The last act is less a romantic tragedy than a belabored gang-war scramble that turns into a tidy plea for tolerance.

And those are problems I don’t think the new version completely solves. Given how Kushner has retooled and enriched the script — Tony and Maria’s romance, for instance, isn’t the melodramatic secret it was before — I was surprised to see that the rumble climaxes in the same old hyped-up but unconvincing way. (No, even with Tony having been in prison, I didn’t buy it.) And once that happens, you feel an energy leak out of the movie.

Up till then, “West Side Story” is a parade of delights. Spielberg has staged “America,” with its rousingly patriotic yet naughty tongue-twisting lyrics, as a swirling, roving block party of triumphant feminine bluster. “One Hand, One Heart” is now a gorgeous hymn, shot through stained-glass sunlight, and where “Gee, Officer Krupke,” set inside a police station, is the number you’d think would have dated most, it’s actually a witty wonder, since the Jets are using the new furrowed-brow therapeutic “understanding” of delinquency to defend themselves, and the joke is that they know it’s all bunk.

Ariana DeBose makes Anita a radiant force of nature, and the legendary Rita Moreno, who played Anita in the original film, is on hand as Valentina, widow of the soda-shop owner Doc.

The 89-year-old Moreno, with a no-frills luminosity, steals every scene she’s in, and her rendition of “Somewhere” is a highlight.

The whole film feels as contemporary as it needs to, since topicality is baked into its tribal dance of racial animosity. “West Side Story” is a bursting, live-wire pageant of a movie. I just wish it had a final act that soared instead of lumbering to what feels like an overly determined message-movie landing. AP/JB