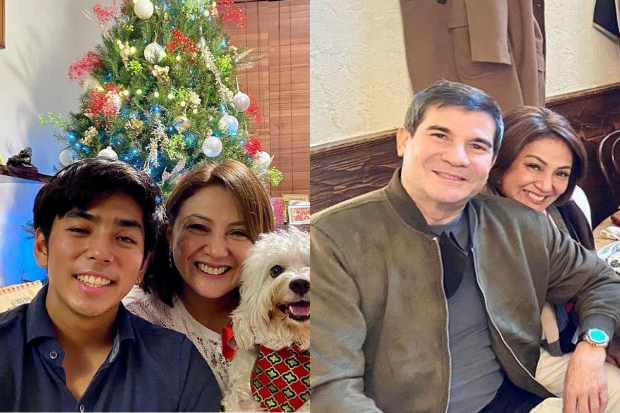 Cherry Pie Picache’s son Nio Tria has expressed his support for his mother’s relationship with her fellow actor Edu Manzano, weeks after the two confirmed they are dating.

Tria showed his support for the relationship when asked about it in an interview for ABS-CBN’s “Kapamilya Chat” shown on the network’s YouTube channel yesterday, Dec. 4. He was interviewed alongside his “Saying Goodbye” co-stars Andrea Brillantes and Seth Fedelin.

Brillantes then pointed out to Tria that some children struggle with “letting go” of their parents who enter new relationships, but Tria assured that he only wants Picache to be happy.

“Mama’s boy ako pero siyempre she deserves her own happiness din, di ba? I mean, ‘yung pagkakaroon ng relationship with someone else doesn’t remove the fact that she is still my mom,” he told Brillantes.

(I’m a mama’s boy but of course she deserves her own happiness as well, right? I mean, her having a relationship with someone else doesn’t remove the fact that she is still my mom.)

Tria also admitted that he was not surprised when Manzano confirmed his relationship with Picache last month.

Manzano confirmed his relationship with Picache in a conversation with TV5 broadcaster Cheryl Cosim last Nov. 19. The actor’s son Luis confessed that the revelation caught him off guard but he can see that Manzano is happy with Picache.

It’s official! Edu Manzano and Cherry Pie Picache are in a relationship

Read Next
‘West Side Story’ review: Steven Spielberg gives the musical classic a gritty, rousing upgrade
EDITORS' PICK
Acer starts the year off strong with the Aspire Vero National Geographic Edition
Gear up and get ready to play with Yamaha Mio Gear
PH to import 60,000 tons of fish to cover shortage
Workers are exempted from ‘no vax, no ride’ policy – DOLE chief
Over 3 Million worth of prizes to be won at Smart Padala’s SENDali Manalo Promo!
#VotePH2022: COVID, power woes loom as poll concerns
MOST READ
Guevarra to Acosta: Obey rules on unvaccinated
PH to import 60,000 tons of fish to cover shortage
Emma Stone calls Andrew Garfield a ‘jerk’ after he ‘lied’ about his ‘Spider-Man: No Way Home’ appearance
Cold-case investigation names surprise suspect in Anne Frank’s betrayal
Don't miss out on the latest news and information.