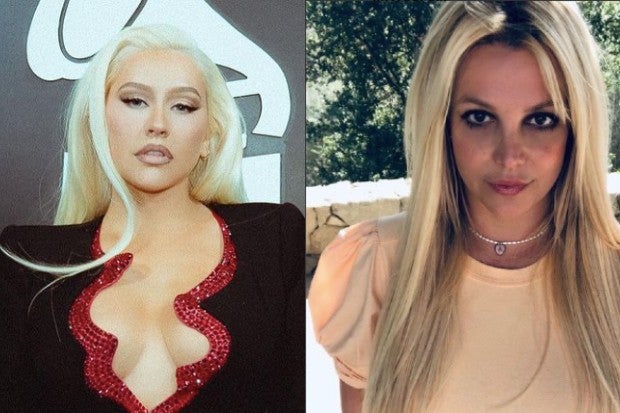 This comes after Aguilera’s interview with the Associated Press at the Latin Grammys last Nov. 18. In a video of the interview, shown on Spears’s Instagram stories Friday, Nov. 19, Aguilera signals to her publicist when asked about whether she has had communication with Spears recently.

Aguilera’s publicist interjects by saying “We’re not doing that,” to which Aguilera adds “I can’t, but I’m happy for her!”

Spears then stated, “I love and adore everyone who supported me… but refusing to speak up when you know the truth, is equivalent to a lie!!!! 13 years being in a corrupt abusive system yet why is it such a hard topic for people to talk about??? I’m the one who went through it!!!! All the supporters who spoke up and supported me thank you… yes I do matter!” 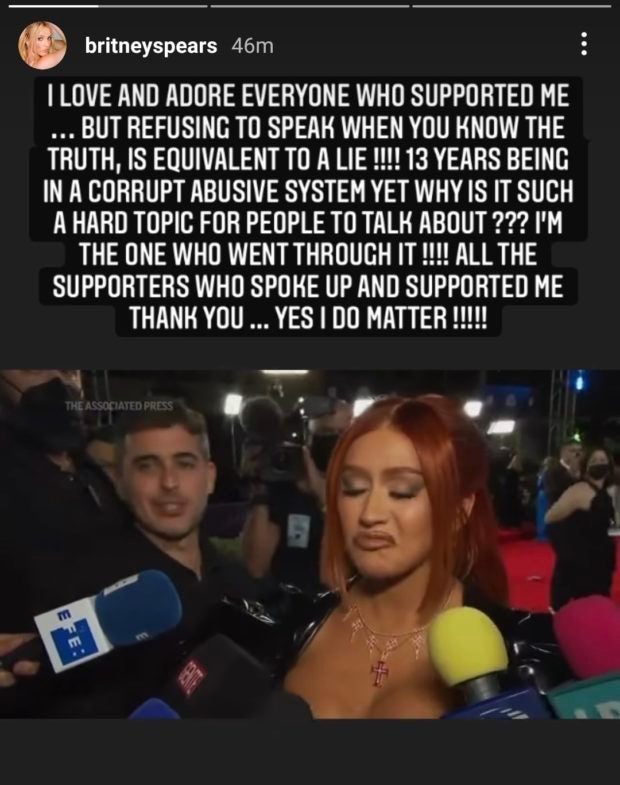 On the same day, Spears commended fellow pop star Lady Gaga for speaking out about the termination of her conservatorship. She said, “Thank you Lady Gaga for genuinely taking your time to say something so kind. You made me cry!!! I love you!!!” 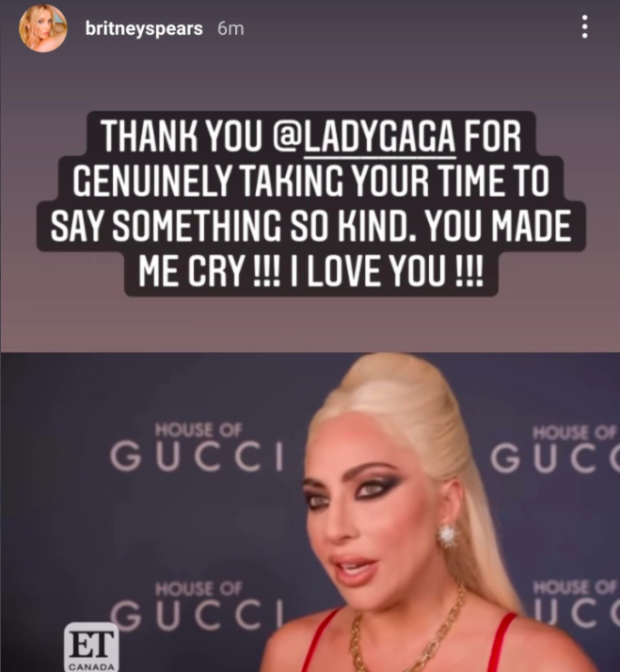 However, fans on Twitter were quick to defend Christina Aguilera, wanting to prove that she supported Spears through a series of tweets about the latter’s conservatorship, back in June.

“To a woman who has worked under conditions and pressure unimaginable to most, I promise you she deserves all of the freedom possible to live her happiest life. My heart goes out to Britney. She deserves all the TRUE love and support in the world,” Aguilera stated on June 29.

To a woman who has worked under conditions and pressure unimaginable to most, I promise you she deserves all of the freedom possible to live her happiest life.

My heart goes out to Britney. She deserves all the TRUE love and support in the world. 🤍

Aguilera shared a picture of them from their childhood at the start of the thread, on the same day.

These past few days I’ve been thinking about Britney and everything she is going through.

It is unacceptable that any woman, or human, wanting to be in control of their own destiny might not be allowed to live life as they wish. pic.twitter.com/NRhNwcJaD3

Aguilera is yet to comment on the statement of Spears, as of this writing.

Spears and Aguilera have been colleagues since their teens, both getting their big break in Disney’s youth oriented TV show, “The All New Mickey Mouse Club.” They have been compared to one another throughout their careers because of their status as 1990s pop stars.

Spears’s conservatorship lasted for 13 years, terminated only recently, Nov. 12. Under its conditions, she was not allowed to get married, have children, and manage her own finances, among others. JB