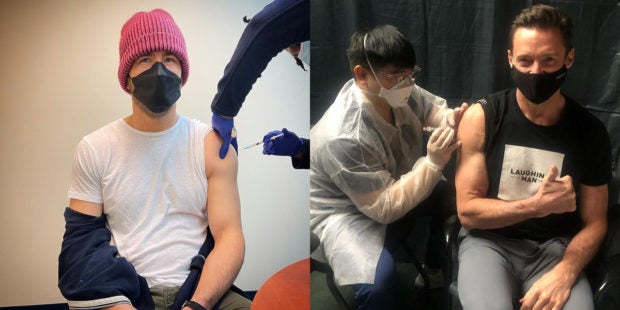 Ryan Reynolds, Britney Spears and Hugh Jackman to name but a few. Numerous stars are leveraging their presence on social media to encourage Americans to get vaccinated. On Twitter and Instagram, endless photos of celebrities receiving their jabs are sending a powerful political message. It is as though the stars have become ambassadors for the vaccination campaign, thanks to social networks.

Last Sunday, the United States network NBC broadcast “Roll Up Your Sleeves,” presented by the singer Ciara and her husband, American footballer Russell Wilson. The goal of the show was to convince Americans to get vaccinated. The current President of the United States, Joe Biden, and former president Barack Obama were just two of the many celebrities who came on air to explain the importance of America’s immunization program.

This is not the first time that an initiative promoted by Joe Biden has found support among Hollywood stars. In the course of his campaign for the White House, the new president was extensively backed by many of America’s best-loved celebrities. Now, once again, the Democratic government is benefiting from the enormous influence of artists who can rally tens of millions of followers on social networks.

Now in the vanguard of the drive for the vaccination campaign, the star of “VEEP,” Julia Louis-Dreyfus, was also noted for the important role she played in Joe Biden’s presidential bid. The 60-year-old American actress, who has 1.4 million followers on Instagram, recently published a selfie of the moment when she received her second shot at a drive-in vaccination center. Her comment on this picture — “Fully jabbed! Fully grateful!” — received more than 126,000 likes on the social network.

Rainn Wilson, the man made famous by his role as Dwight Schrute in the cult comedy series, “The Office,” also shared his enthusiasm for the vaccination program. The 55-year-old American actor simultaneously posted to his Instagram and Twitter accounts to announce that he would be receiving the Moderna jab with a selfie in front of a large vaccination tent filled with other citizens waiting for their shots. His post, which was rewarded with more than 18,500 likes on Twitter, garnered a further 130,000 approvals on Instagram.

Gettin’ my Moderna On!!!!! What what!? #Science pic.twitter.com/5NikTFc7b6

“Deadpool” star Ryan Reynolds used humor to reach out to his 37.2 million followers on Instagram. In a sarcastic rejoinder to the numerous conspiracy theories that have been circulated about the vaccination program, the American actor presented a picture of his jab with the caption: “Finally got 5G.” The quip was clearly well received by his fans who rewarded the post with 3.7 million likes.

His wife Blake Lively also shared the moment of her vaccination with the 28.3 million people who follow the American actress on Instagram. Her post bearing a caption in praise of the “heroic nurse” who administered the jab obviously struck a chord, garnering more than 2.7 million likes.

While some just sought to show the moment and emphasize its importance, other celebrities adopted a more pedagogical approach, providing details on the sensation they experienced when receiving the jab.

A case in point was pop idol Britney Spears. On April 9, the 39-year-old American singer, who enjoys a massive following on social media, published a video of herself in which she responds to a question from her boyfriend, Sam Asghari. In the very short clip, which lasts for only 14 seconds, the star who has recently been in the news for the “Free Britney” movement, explains how well she feels after a vaccine injection that did not hurt. The video was watched more than 2.1 million times by some of Britney’s 56 million followers on Twitter, where it received more than 103,000 likes. The clip was also posted on Instagram where it has been liked nearly a million times.

The Queen of R&B, Mariah Carey, went even further, filming the moment of her vaccination. In an 89-second video posted on her Instagram, the 52-year-old singer talks about her fears and at the same time insists that everyone should get vaccinated for the common good. Mariah Carey also made use of a new Instagram subtitling functionality that makes videos accessible to the deaf and hard of hearing. When she was finally injected, the singer let out an unexpectedly strident scream. However, this did not affect the popularity of the video, which has now been viewed more than three million times.

Other stars like Hugh Jackman and Sarah Michelle Gellar were more direct in their message to web users on the benefits of the COVID-19 vaccine. Both stars published photographs of themselves wearing masks while receiving jabs.

Geller, in particular, penned a lengthy March 30 post for her 3.5 million followers on Instagram. The “Buffy the Vampire Slayer” star had this to say: “I am proud to say that I am fully vaccinated against #covid_19. As someone who suffers from severe asthma, and has been hospitalized because of it, this last year has been really scary. But I didn’t just get this shot for me. I got it for all the immune compromised people. I got it for every person that lost a loved one due to COVID. I got it, in the hopes that all kids can return safely to school. I got it, for all people who found themselves suddenly unemployed due to COVID, in the hopes they can get back on their feet. I got it for all the families that in a moment, found themselves food insecure and worried where their next meal would come from. I got it because I miss my friends and family and hugs. This wasn’t just about me. It’s about all of us. Thank you to everyone that made this day possible for me.”

Although some social media users voiced skeptical views about the vaccine campaign, the vast majority of commentators on celebrity vaccination posts thanked the stars for taking the initiative. Some of them also shared a little about their own motives, notably one woman who remarked: “My mother who fought cancer is the reason why I am getting vaccinated.”

The question now is: how will the vaccination campaign be affected by this show of commitment on the part of Hollywood celebrities?

According to the latest data from America’s Centers for Disease Control and Prevention, approximately 25.4% of the U.S. population has now been fully vaccinated. As of April 19, everyone in the United States is now eligible for the vaccination campaign. JB

Ted Nugent tests positive for COVID-19 after downplaying pandemic: ‘I thought I was dying’