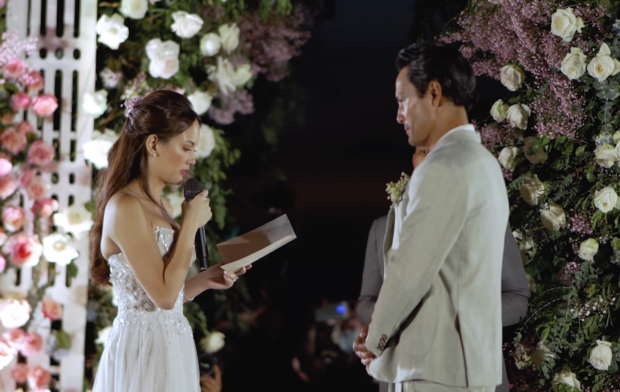 Ellen Adarna and Derek Ramsay have given fans a closer look into their recent wedding in Bataan, and there was hardly a dry eye in the intimate gathering.

The actor can be seen hanging out with some friends before the ceremony while Adarna got her makeup done in a separate room, as seen in their official wedding video on photographer Bob Nicolas’ YouTube channel yesterday, Nov. 14.

The two can also be seen crying while the actress was walking down the aisle, and Ramsay was again brought to tears as he delivered his vows to Adarna.

“I have no doubts when it comes to our relationship. I have no doubts [about] what I feel for you and Elias,” Ramsay told Adarna. “Despite the speed of everything, I have never been so sure about anything in my life. I have fallen so deeply in love with you.”

He then recounted the day he told his parents he wanted to marry Adarna, adding that his mother and father wondered why their relationship was moving “too fast” and “too soon.”

“I told them, ‘In my 44 years, have I ever mentioned the M word to you guys?’ I guess that question made them realize how serious I was and how happy I was to have you,” he narrated. “Even my son Austin, who was the first person I told, was happy about this decision and finally called me ‘dad’ for the first time.”

Adarna also recited her own vows.

“I do not seem to know what’s okay or not, what’s right or wrong, here or there, left or right, the noise, the confusion. All I know is that when I close my eyes, when I focus on myself and when I focus on us, and when I meditate, it’s you,” she said.

“There is no perfect person. It’s just the one that I choose, the one that’s worth fighting for. And it’s you,” Adarna addressed Ramsay.

Aside from their messages to each other in their wedding video, Ramsay can also be seen reading another part of his vows in a viral TikTok post last Saturday, Nov. 13.

“Life is a b*tch, then you marry one,” he quipped, drawing laughs from Adarna and their wedding guests.

Adarna and Ramsay got married at Rancho Bernardo Luxury Villas and Resort in Bataan last Thursday, Nov. 11. The wedding was attended by Adarna’s son Elias, Ramsay’s son Austin, and close relatives and friends.

Celebrity doctors Vicki Belo and Hayden Kho were at the wedding with their daughter Scarlet Snow. Actress Beauty Gonzalez was also present. JB

‘No action’: Ellen Adarna, Derek Ramsay slept with her mom on their wedding night