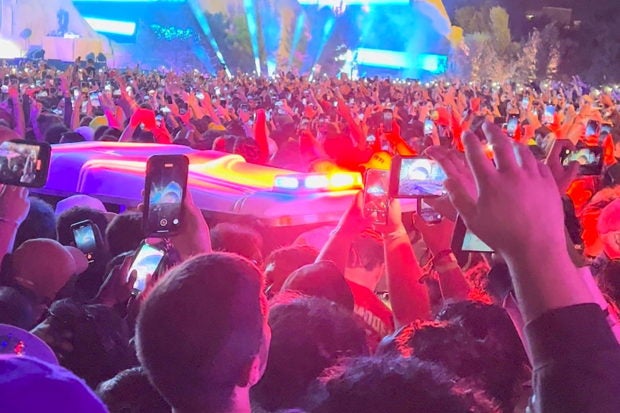 An ambulance is seen in the crowd during the Astroworld music festiwal in Houston, Texas, U.S., Nov. 5, 2021 in this still image obtained from a social media video on Nov. 6, 2021. Image: Twitter @ONACASELLA via Reuters

HOUSTON — At least two investigations, one of them criminal, were underway on Sunday into the deadly stampede during rap star Travis Scott’s Astroworld music festival that killed at least eight people and injured dozens in Houston.

Officials in Houston said autopsies on Frriday’s victims were being performed as soon as possible so their bodies could be returned to family members, with the identities of some of the dead expected to be released on Sunday.

The dead were young, Houston Mayor Sylvester Turner told reporters on Saturday: two were aged 14 and 16, two were 21, another two were 23, with a seventh aged 27. An eighth victim has yet to be identified, he added.

Harris County Judge Lina Hildago called for an “objective, independent” investigation into the tragedy, as she spoke about the rap festival being attended by 50,000 fans when the stampede took place.

In a 90-second video released on Twitter on Saturday, Scott said that, while on stage, “I could just not imagine the severity of the situation.” He described himself as “absolutely devastated” by the incident.

Houston city police chief Troy Finner said his department had opened a criminal investigation by homicide and narcotics detectives, following reports that somebody in the audience had been injecting people with drugs.

The city’s fire chief, Samuel Pena, said several concert goers had to be revived with the anti-drug overdose medicine Narcan, including a security officer who appeared to have been injected in the neck with a substance by a concertgoer.

The rest of the two-day festival has been cancelled after the disaster unfolded at NRG Park at about 9:30 p.m. during the headline performance by Scott, a Grammy-nominated singer and producer, at the climax of the opening day.

The deaths happened near the stage when the crowd surged towards it, with some suffering cardiac arrests and other medical trauma, officials said. JB