Lifehouse looking forward to a great show in Manila 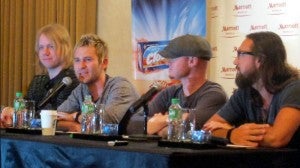 Composed of Jason Wade (vocals, guitar), Rick Woolstenhulme Jr. (drums), Bryce Soderberg (bass) and Ben Carey (guitar), Lifehouse attained worldwide fame in 2001 with the release of the song “Hanging by a Moment,” which won a Billboard Music Award for Hot 100 Single of the Year.

Tickets to its concert on May 26 at the Smart Araneta Coliseum are selling fast, with the VIP and lower box sections sold out, according to promoters.

Below are excerpts of an e-mail interview that the band’s lead vocalist, Jason Wade, granted the Philippine Daily Inquirer.

How much of an influence was grunge and other rock genres when you first started getting serious as a musician?

Nirvana’s “Nevermind” was a big influence, but at the same time Elliott Smith and the Beatles were also very important.
|
What was your biggest motivation in forming Lifehouse?

I never felt comfortable being a solo artist. The idea of being in a band with your friends was always exciting to me. Forming Lifehouse was based around the collection of songs that I wrote between the ages of 15-19.

Can you recall hard times when it seemed like the band would fall apart from the rigors of touring?

In 2003, when our second album, “Stanley Climbfall,” was not well-received and shortly after, our guitarist and bass player quit the band. Rick and I wanted to carry on. And then we met Bryce and Ben.

What emotional factors help you to write songs?

I’ve always used my personal experiences as a canvas to write on. Relationships have always played a huge part in the inspiration of Lifehouse songs.

The digital revolution has changed the way people listen to music. How has this worked for bands, in spite of declining CD sales?

Everyone is talking about the demise of the record industry. But there’s still so much talent out there and they can use their iPads to make music and they can go to YouTube and develop a fan base.

You collaborated with Kevin Rudolf and Chris Daughtry in the “Smoke and Mirrors” album. What do you like about hip hop, and what did you appreciate most about Daughtry?

I felt that both Kevin and Chris had tapped into something totally different creatively, and I felt that our collaborations would be something unique. It was a great experience.

How would you rate “Smoke and Mirrors” alongside the previous albums?

It is hard to rate your albums. They are all different experiences. In retrospect, “Smoke and Mirrors” may be third on my list.

Who are the other bands that excite you these days?

I have been listening to a lot of vintage jazz … Count Basie, Artie Shaw and Benny Goodman. The thing about old jazz music is it makes your mind think of certain things even without lyrics. As for the new bands, I really like Foster the People.

What do you think of Jack Black’s recent statement that the last great band was Nirvana?

I think Jack Black was great in (the film) “Envy.”

You played in Manila four years ago. What do you expect this time?

We reminisce about that show all the time. By far the best show we have ever played. If the crowd would be anywhere close to the same energy as last time, I’m sure we’re gonna be extremely pleased.