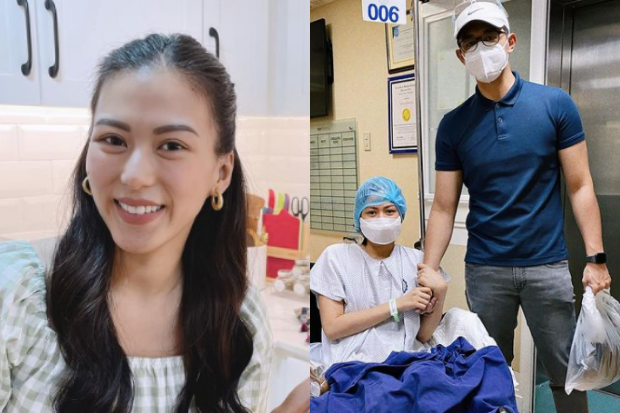 Alex Gonzaga looked back at her “pregnancy journey” after revealing that she had a miscarriage. She reminded the public that there is hope despite painful situations.

The actress recounted how she and her husband, Lipa City councilor Mikee Morada, handled her miscarriage through a YouTube vlog today, Oct. 24. According to Gonzaga, she and Morada came from a vacation in Batangas when she found out she was pregnant.

“We were both excited and told our family and doctor right away. Although we were advised by our doctor not to announce it [yet],” Gonzaga narrated.

Two weeks later, the couple had one of their “saddest days” when they were informed that Gonzaga had a blighted ovum pregnancy, a condition where a fertilized egg cell does not develop or stops developing.

(I remember the moment the doctor told me, she touched my legs so I knew there was something wrong… That’s what made me really sad because I know I’m not the only one who wanted it, but more so Mikee.)

Gonzaga experienced pain and bleeding when she had her miscarriage so she and Morada went straight to a hospital.

“The next day, Mikee left for work. I realized my pregnancy was really over,” she said, admitting that seeing random babies on the internet made her cry.

Gonzaga confessed that she felt like she failed as a wife, but Morada assured her that what they are feeling is indeed “part of the process.”

(The reason why we made this vlog is to show people that you can, and there is hope. Though it hurts, there will come a time that the Lord will replace your pain with joy.)

“We really wanted to always remember na meron kaming (that we had a) first pregnancy and through this pregnancy, nag-strengthen ‘yung relationship namin (our relationship was strengthened),” she added.

Gonzaga assured fans that she and Morada are doing well. She also said that if she does get pregnant again, they will not announce it right away.

“We’ll just try. Masarap naman mag-try,” she joked. “Baka magulat na lang kayo may 18 years old na kami.” (It feels good to try. You might be shocked that we already have an 18-year-old.) JB