WATCH: John Legend surprises fan singing ‘All of Me’ on street 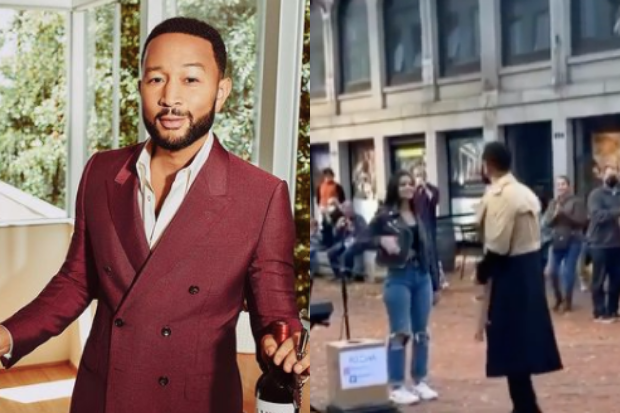 John Legend surprised a street performer fan when he stopped by to listen while she serenaded a crowd with her rendition of the hit song “All of Me.”

The American singer-songwriter was at the Faneuil Hall Marketplace in Boston in the United States when he came across street musician Radha Rao. She was performing his song “All of Me,” as seen on Rao’s Instagram page yesterday. Oct. 18.

Legend appeared to be impressed with Rao’s version of his song as he gave her a tip, hugged her and applauded while a crowd cheered.

“Street performing [in] Faneuil Hall has given me some of the most spontaneous life experiences. Grateful to have gotten the opportunity to sing for the incredible [John Legend] and his family today,” Rao said.

“All of Me” is typically part of Rao’s two-hour sets when she sings on streets, she told The Boston Globe yesterday, Oct. 18. She added that she is a “longtime Legend fan.”

“I really respect his art and his dedication [and] the way he’s been able to move and impact others. [I’ve] always loved ‘All of Me,’” Rao said in the interview.

“I was playing it, and then he happened to appear after I started the song, so it was quite a shocking experience. I didn’t really recognize that it was him at first,” she was quoted as saying. “[He] had a mask on and then he took his mask off and his kids were there, [Chrissy Teigen, his wife] was there.”

Legend is a Grammy Award-winning singer who also hosts the American talent competition “The Voice.” Aside from “All of Me,” he is also known for his hits “Conversations in the Dark,” “Ordinary People” and “You & I,” among others.  /ra

TAGS: All of Me, Boston, Chrissy Teigen, John Legend, The Voice