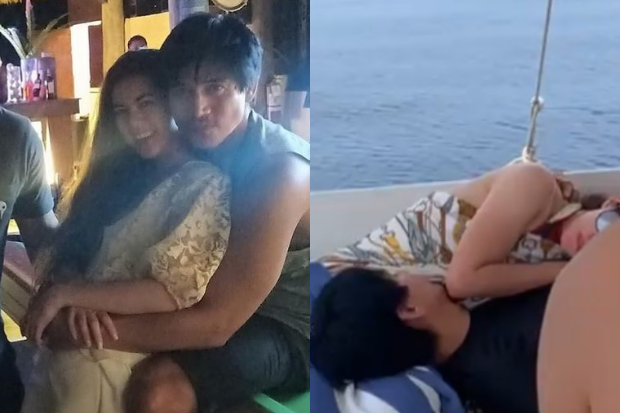 Piolo Pascual and Shaina Magdayao appeared to be affectionate towards each other during a beach trip, where they were spotted hugging and holding hands.

Pascual and Magdayao were seen together in what looked like a beach resort, as shown on one @shailo2012’s Instagram page yesterday, Oct. 18. They were accompanied by fellow actors Jodi Sta. Maria and Raymart Santiago, who confirmed their relationship in September last year.

While the photos featured other people, fans were quick to notice that Pascual was hugging Magdayao from the back, while she held his hands in front of her. The netizen said the photos were taken in Bohol.

Meanwhile, another photo from the netizen’s page showed Pascual and Magdayao napping together in what appears to be a boat. Pascual’s head was on Magdayao’s lap while the actress leaned on Pascual’s chest.

The photos have since circulated online, leading fans to speculate that the two might be in a relationship.

(This is the couple who have been “exclusively dating” for a long time but there’s no confirmation.)

“Piolo Pascual and Shaina [Magdayao’s public display of affection] moments in Bohol keep netizens guessing whether or not they are in a relationship,” Larry Deang (@larzlarzlarz), pointed out.

The real score between Pascual and Magdayao has been a matter of guesswork among fans. Pascual revealed to Inquirer Bandera in 2017 that he and Magdayao were exclusively dating for over five years. However, Magdayao stressed in past interviews that she and Pascual are free to date other people. JB

Read Next
Goodbye Kanye West, hello Ye: Judge approves name change request
EDITORS' PICK
Metro Manila posts lowest temperature yet this ‘amihan’ season at 19°C
Acer starts the year off strong with the Aspire Vero National Geographic Edition
Over 3 Million worth of prizes to be won at Smart Padala’s SENDali Manalo Promo!
Gear up and get ready to play with Yamaha Mio Gear
DOH: 28,471 new COVID-19 cases in PH; active cases now 284,458
On Day 2 of implementation, gov’t says workers now exempt from ‘no vax, no ride’ policy
MOST READ
Derek Ramsay on being married to Ellen Adarna: ‘Gumaan ‘yung mundo ko’
Emma Stone calls Andrew Garfield a ‘jerk’ after he ‘lied’ about his ‘Spider-Man: No Way Home’ appearance
Lucky plants to grow in 2022
Retirements prompting major reshuffle in PH military
Don't miss out on the latest news and information.