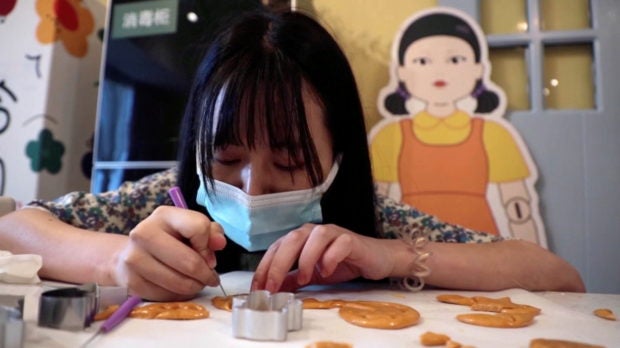 A customer uses a tool to cut a biscuit into a shape during a session of a South Korean Netflix show “Squid Game”-themed confection-making event, at a bakery in Beijing, China in this screengrab from a video taken on Oct. 16, 2021. Image: Reuters

BEIJING — A Beijing bakery has introduced a Squid Game-themed confection-making challenge in its store as it seeks to cash in on the massive popularity of the South Korean Netflix show.

For 58 yuan ($9), customers can pretend to be a character in the smash-hit series by taking part in the challenge to make the candy, called dalgona, by trying to convert a mixture of sugar and baking soda into neatly shaped biscuits.

There is no prize for success and no penalty for failure, unlike on the TV show where winners are rewarded with a massive cash prize for winners and losers are punished with death.

“Our customers are mainly young people and young people make up many of this show’s fans,” Hao Jing owner of the DIY Bakery & More store, who is herself a big fan of the show, said on Saturday.

In the challenge, which takes about 10 minutes, participants choose metal biscuit-template shapes, melt the sugar, add the baking soda, then convert the mixture into shapes. The last stage is tricky because the mixture sets quickly, becoming brittle and prone to cracking. 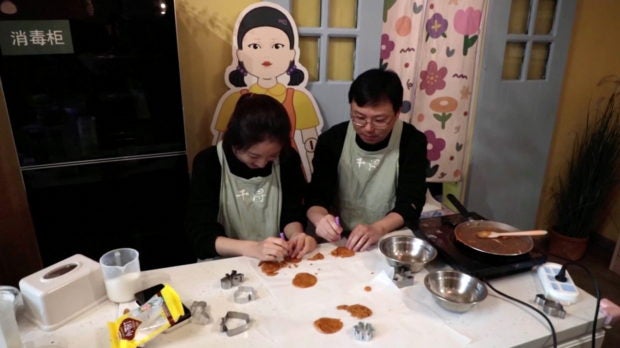 Customers use tools to cut biscuits into shapes during a session of a South Korean Netflix show “Squid Game”-themed confection-making event, at a bakery in Beijing, China in this screengrab from a video taken on Oct. 16, 2021. Image: Reuters

“Just now when I was doing the first shape I thought I was doing really well,” said 27-year-old Li Zi.

“But then I got to this one, and broke it,” she said, holding up two parts of a star-shaped biscuit. And then I subconsciously started shaking a little with nerves as I thought about the show.”

Since the bakery last week added the “Squid Game” challenge to its menu of cake and dessert-making activities, around 20 customers or pairs of customers have taken part.

“Squid Game,” a nine-part thriller in which cash-strapped contestants play deadly versions of childhood games in a bid to win 45.6 billion won ($38.58 million), has become a worldwide sensation since its September release.

Netflix is not available in China without a VPN, but many fans have found ways to see it via online entertainment platforms like the popular “Renren Shipin.” JB