Mountain Dew brings you Battle of Bangis: Cong vs. Ivana

Two teams—one led by Cong and the other by Ivana Alawi—will slug it out in the Mountain Dew Battle of Bangis, a series of challenges that will test their physical, mental and emotional strength, plus teamwork. This is the challenge to watch out for.

In the true sense of supporting adventure and activities best experienced among friends, Mountain Dew brings to the public Battle of Bangis which will see Cong, Ivana, and their respective teammates taking part in different bootcamp challenges—Pisikalan, Walang Iyakan, Mind Over Matter, and Tropahan–over three weeks from October 10 to 27 leading up to the finale dubbed Mountain Dew Battle of Bangis D’ Ultimate Showdown on November 7. 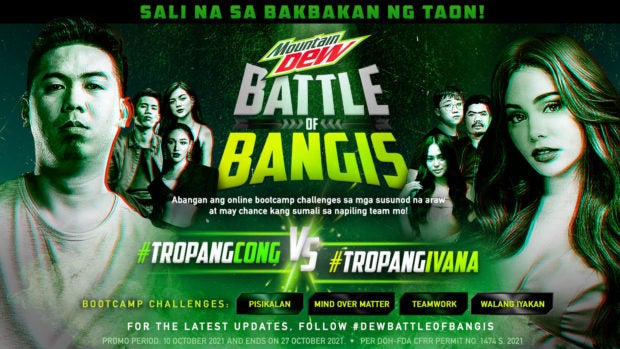 Team Cong is composed of singer, YouTuber and influencer Mika Salamanca, vlogger Junnie Boy and actress and model Sachzna. Team Ivana, on the other hand, is made up of streamer and content creator Khenji Saito, TikTok superstar Yukii Takahashi and influencer and “Asian cutie” Albert Nicolas.

Dewds at home have the chance to win Mountain Dew Battle of Bangis and be part of their favorite tropa. All they have to do is upload a video doing their take of the bootcamp challenge of the week and use #DewBattleOfBangis to make it count as their official “audition” video. Dewds can send in as many videos as they want, regardless of which team they want to join! Each tropa is looking for six Dewds to be part of their team so you’ll have many chances of making it.

The three weeks of challenges will culminate in the Mountain Dew Battle of Bangis D’ Ultimate Showdown on November 7. The showdown, to be hosted by Sam YG featuring special guest James Reid, will be streamed live on Mountain Dew’s Facebook page.  Chosen participants from the past online bootcamp challenges will be part of Tropang Cong and Tropang Ivana. The ultimate battleground—Call of Duty Mobile—will be the final test of the participants’ strength and cunning. During this showdown, they will be coached by playing Team Captains Cong and Ivana.

For more information about Mountain Dew and Battle of Bangis, check out this link BattleOfBangis or go to its official IG and FB pages and follow #DewBattleOfBangis .

Bong Go: Duterte and I have no ties with those nailed in Pharmally mess