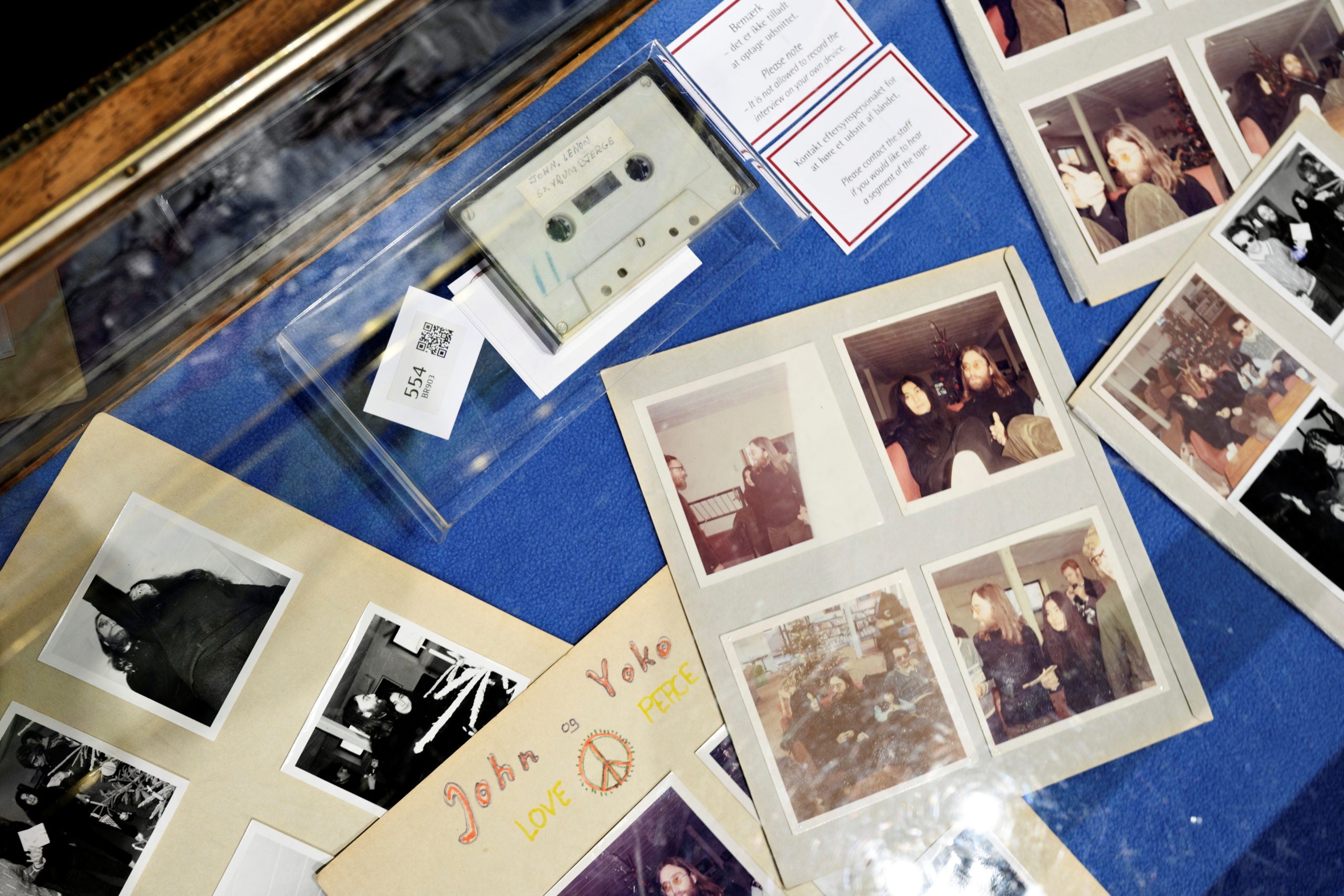 View of items at an auction of polariods and a cassette with the recording of Danish schoolboys’ interviews with John Lennon and Yoko Ono during the couple’s winter stay in Thy, Jutland, Denmark in 1970 at Bruun Rasmussen Auction House in Copenhagen, Denmark, September 28, 2021. (REUTERS)

COPENHAGEN  – A cassette tape recording of an interview with John Lennon and Yoko Ono, including a never-released song, made while they visited Denmark in 1970 sold for 370,000 Danish crowns ($58,300) at an auction in Copenhagen on Tuesday.

The tape, featuring the unreleased song “Radio Peace,” was recorded on Jan. 5, 1970 by four 16-year-old Danish boys who succeeded in getting an interview with the couple for a school magazine.

It was not immediately known who bought the recording.

During the 33-minute recording, Lennon speaks about the couple’s peace campaign, his frustration with the Beatles’ image and the length of his hair.

The recording also features Lennon and Ono humming along to Christmas songs while dancing around a Christmas tree, Lennon playing the guitar and the couple singing “Give Peace a Chance” and “Radio Peace.”

The up-tempo song, which repeats the words “this is Radio Peace,” refers to a radio station of the same name that Lennon and Ono hoped to establish in Amsterdam, the auction house said.

The couple arrived in northern Denmark in late December 1969 and stayed at an isolated farm for more than a month, according to the auction house.

On the recording, the teenage boys ask how they can aid Lennon and Ono in their quest for world peace, to which Lennon responds: “If you can’t think of any idea yourself, imitate what we do. Just sit down and think, what can I do locally for peace?”

One of the four owners of the recording, Karsten Hojen, now 68 years old, was present at Tuesday’s auction. He was glad he was able to pass on the message of peace by the famous couple to the new owner.

“The meeting with John Lennon and Yoko Ono has had a great impact on our lives because we saw them as a kind of political prophets and symbols of peace,” Hojen said in a statement.

“I hope the new owner will enjoy listening to our conversation and be inspired in the same way we were 50 years ago.”