Unacceptable: Gerald Anderson on being a sperm donor to ex-gf like in latest drama series | Inquirer Entertainment
Close
menu
search

Unacceptable: Gerald Anderson on being a sperm donor to ex-gf like in latest drama series 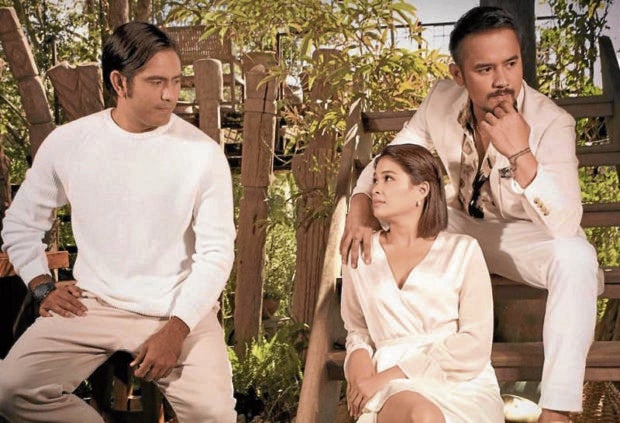 Before the final episode of the dramatic series, “Init sa Magdamag” streamed on Sept. 10, its three lead actors were asked to recall their most memorable scenes in the show. Gerald Anderson gave the most interesting reply: Being a sperm donor to his ex-girlfriend and her husband.

“It’s memorable also because it’s actually hard to do in real life. If this ever happened to me, my first reaction would be, ‘Why me?’” Gerald told reporters during a virtual media chat.

Gerald plays Christopher or Tupe in the series, a doctor to the barrios. Meanwhile, Yam Concepcion and JM de Guzman play the prominent political couple Rita and Peterson, whose marriage is on the brink of collapse as they struggled to have a child. Peterson met an accident years earlier that made him incapable of fathering one. Rita believes they can save their relationship if she bears a child through in vitro fertilization, but Peterson proposes what he thinks is a simpler solution—to get Tupe to be their sperm donor.

“If we’re talking about real life here, I’m sure it would be the hardest thing to accept. It will really depend on the situation of the person asking for help. Of course, I want that my first child would be carried by the woman I actually love. I also want to be able to take care of that baby and call it mine. But then, people are faced with different obstacles each day. My decision to become a sperm donor will really depend on a lot of things,” Gerald pointed out.

As for JM, he said the time he figured in an accident while taping in Tanay, Rizal, has got to be the most memorable one. “I had four stitches as a result of that,” he recalled. On his Instagram account, JM shared a video of the deep wound on his forehead.

“It happened because one of the scenes we were taping got so intense. I will never forget that incident because whenever I look at the mirror I see a scar there,” he shared with reporters.

When it was Yam’s turn to speak, she said it had been memorable to play a character who is being physically abused by her husband. “I think this show is brave for choosing to tackle that issue. I’m very grateful to have been part of a project that empowers women. I can’t speak much for battered wives because I’ve never experienced what they’re going through, even though I know that they’re experiencing something painful both physically and emotionally,” she pointed out. “I just want to encourage them to stand up for themselves, to make an effort to know their worth as a person.”

JM, who plays the wife-beater, added: “There are a lot of people who don’t have the voice to make their suffering known. I feel that, since I play that part, I also have this big responsibility as an actor to not appear as if I’m condoning such bad behavior. There’s really a thin line between the two. What’s good is that I get help from the writers and directors. We really make sure that it’s clear to the audience that it’s wrong to physically hurt women.”

Gerald added that even though the said issue was really part of Peterson and Rita’s storyline, he also felt proud to be of help when it came to spreading awareness. He claimed to have received messages from viewers who said they were able to relate to some of the situations presented in the program.

“It’s good that toward the end, Rita managed to develop self-respect and transformed into an emotionally stronger person. I realized it was really her love for Peterson that made her accept everything about him, the good and the bad. This makes the show very relatable,” he said. “I’ve received text messages from people saying they are pleased with how Rita managed to rise up. This show is really impactful. I’m proud to have been a part of something that gives inspiration and courage to women who are going through difficult times. It has always been one of my goals to participate in projects that impart values to their viewers.”

After portraying the role of a doctor, Gerald said he now has a greater understanding and respect for what medical frontliners do in order to help others. “I think this is really the time that we focus all our attention on them. We have to do our part in providing for their needs, because if we don’t, then who will take care of us when we get sick?” he pointed out. “We see no improvement in their situation, especially now that the number of infected cases keeps rising. They have no time to rest. Unlike us actors—we also get tired after working all day—but at night, we are able to go home, take long showers, and watch TV before heading to sleep. This is not the case for our frontliners, so let’s show them our appreciation. Let’s give them what they are demanding because we know they deserve it. They are out there fighting an invisible enemy for us.” INQ