R. Kelly accuser says singer starved her for days before assaulting her 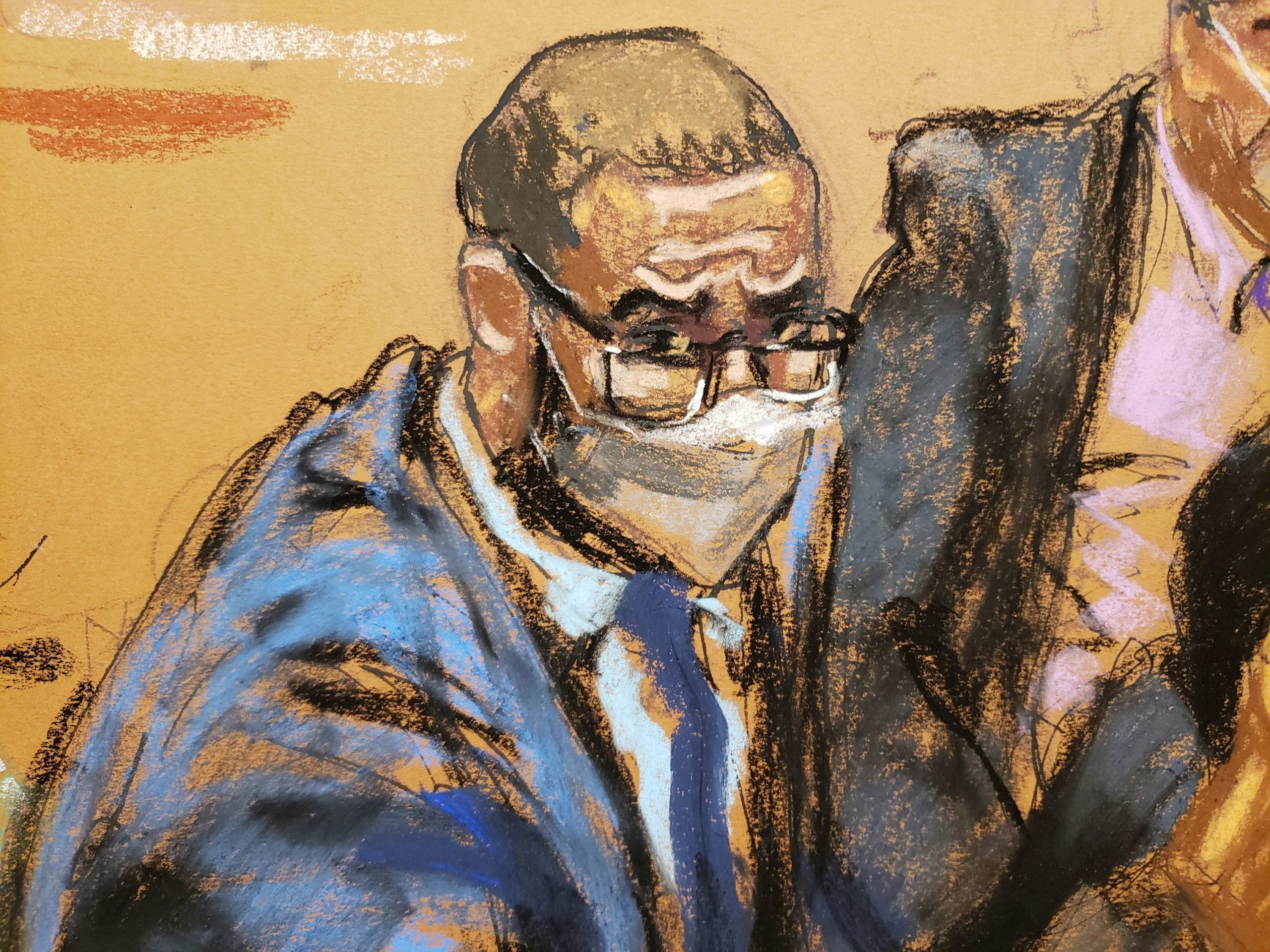 R. Kelly sits with two of his defense attorneys during his sex abuse trial at Brooklyn’s Federal District Court in a courtroom sketch in New York, U.S., September 9, 2021. REUTERS/Jane Rosenberg

NEW YORK —  R. Kelly sexually assaulted a woman at his Chicago studio nearly two decades ago, where he locked her up without food and water, the woman testified at the R&B singer’s sex abuse trial in Brooklyn on Thursday.

The woman, identified as Sonia, said she was kept at least two days in a locked room at Kelly’s Chocolate Factory studio in 2003, where she had hoped to interview him for a Utah radio station as a then 21-year-old intern.

Sonia said that after finally being allowed to eat she became “extremely full” after a few bites and “felt something coming over” before falling asleep.

She said Kelly was adjusting his pants when she woke up, and recalled feeling “wet stuff” between her legs and on her thighs.

“Made me feel like something happened to me,” Sonia told Assistant U.S. Attorney Maria Cruz Melendez. “I know my body … I was touched sexually.”

On cross-examination, Kelly’s lawyer Deveraux Cannick questioned why Sonia did not immediately call the police or see a doctor, waiting instead until the 2019 Lifetime documentary “Surviving R. Kelly” described Kelly’s other alleged abuses.

Sonia later told Melendez she did not think anyone would believe her, and that she had been scared of Kelly.

The 54-year-od singer, whose full name is Robert Sylvester Kelly, has pleaded not guilty to running an alleged decades-long racketeering scheme targeting women and girls, with help from people he employed.

Several women, including some not identified in the indictment, have already testified to the seven-man, five-woman jury about alleged abuses by Kelly, whose songs include the Grammy-winning “I Believe I Can Fly” and “Bump N’ Grind.”

The trial began on August 18, and Thursday’s session was the first since September 3.

Sonia testified that she signed two nondisclosure agreements, neither of which she read, upon arriving at and before leaving the Chocolate Factory.

She also said she was admonished before leaving not to cross Kelly, with an obscenity added for emphasis, which she took as a threat. The interview never occurred, she said.

Kelly’s lawyers have been trying to show that the singer’s accusers wanted to be with him.

Sonia told Cannick she traveled to Chicago on her own, with Kelly’s team handling the logistics because her radio station would not arrange it.

But when asked why she did not read the second non-disclosure agreement, after the alleged assault occurred, Sonia told Cannick: “I just wanted to go home.”

During the trial, several witnesses have said Kelly demanded reverence from women and girls in his entourage and that they strictly comply with his rules, including getting approval before eating or turning their attention away from him.

After Sonia testified, another woman identified as Anna told jurors that during a sexual relationship that ended in December 2017, Kelly inflicted spankings and other punishment when she broke his rules and recorded the activity on his iPad.

Now in her mid-20s, Anna also said Kelly made her have unwanted sex with other women and with a man he called “Nephew.”

Another accuser, Jane, who said her four-year relationship with Kelly ended in 2019, testified on August 24 to having sex with Nephew multiple times at Kelly’s direction.