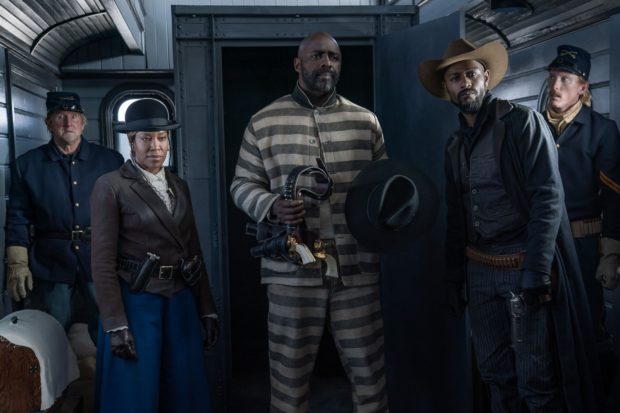 “The Harder They Fall.” Image: Netflix

The London Film Festival will return to big screens next month with the world premiere of “The Harder They Fall,” a Western co-produced by Jay-Z and starring Idris Elba, organizers confirmed Tuesday.

The movie is directed by Londoner Jeymes Samuel, who made his directorial debut with the 2013 Western “They Die by Dawn.”

Hollywood star Kristen Stewart’s portrayal of Princess Diana, “Spencer,” will also screen at the festival, after getting its premiere at the Venice Film Festival earlier this month.

Other star-studded entrants include “King Richard” featuring Will Smith as the father of tennis stars Venus and Serena Williams; and “Mothering Sunday” starring “The Crown” actors Olivia Colman and Josh O’Connor.

Meanwhile, the opening two episodes in the third series of hit HBO show “Succession” will get their European premiere as part of an expanded list of television entries.

“Across the whole of the program, artists are exploring a range of serious themes: the impact of the global pandemic, the climate emergency, racial and wealth inequality,” festival director Tricia Tuttle said as she unveiled the full line-up. “And like the rest of us, filmmakers and artists are searching for answers to impossible questions.”

Organizers announced earlier this year that the 2021 festival’s biggest premieres will move from Leicester Square to the Royal Festival Hall on London’s South Bank.

A selection of the films will also be shown at 10 venues in cities and towns across the United Kingdom, in what Tuttle said was an effort to “remove geographical barriers” and introduce “greater access and more free ways to engage.” JB