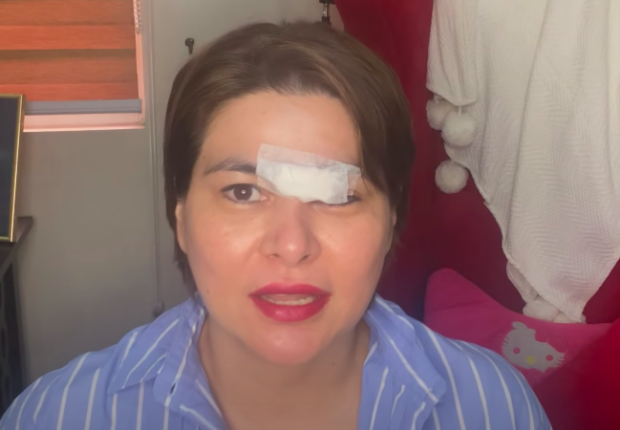 Aiko Melendez is currently recovering from a forehead injury she sustained after an accident inside her home.

The actress had to have her forehead stitched as she suffered deep cut after hitting her head on the sink, she disclosed via a YouTube video yesterday, Sept. 1.

To prevent rumors from spreading on social media, Melendez emphasized that she did not get into a fight nor was she assaulted.

(Last night, while eating spicy Korean ramen, it was as if my stomach was turning. Still, being hardheaded, I pushed myself to keep eating until finally, I had to vomit.)

(When I exerted effort, I just got dizzy, then my head hit the sink. Next thing I know, I was lying on the floor.)

She recalled that her sister started screaming when she found her, as blood was gushing out of her head due to the deep cut, although she assured her that she was fine.

(So that is how it is; when you sustain a big cut on your head, you will not really feel the blood gushing out or the pain, because I was blacked out.)

Melendez then received help from her family, including her brother Angelo, who is a nurse. She was rushed to the hospital, but finding one proved to be difficult due to the COVID-19 pandemic.

Fortunately on their third attempt, Melendez and her family found a hospital that was still accepting non-COVID patients.

Melendez also shared that she was lucky her optic nerves were not damaged, according to the doctor, or her injury might have been worse.

The actress expressed her gratitude to her “Prima Donnas” director Gina Alajar for her concern and understanding of her situation, as well as to her fans who sent her well wishes.

(Thank you very much to all of you who are messaging me. Thank you so much for your concern, and to those who are asking, there, I have answered you.)

“Na-appreciate ko po lahat ng message niyo (I appreciate all your messages),” added Melendez, who also reminded the public to always take care of themselves especially during these times.  /ra

Have Kiko Estrada, Heaven Peralejo broken up? Speculations rise as he unfollows her