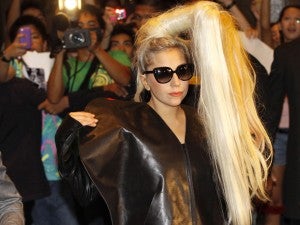 American pop singer and songwriter Lady Gaga poses before the media upon her arrival in a hotel Saturday in Manila's financial district of Makati. Lady Gaga will hold two concerts on May 21 and 22 in the country as part of her Asian tour. AP/PAT ROQUE

Ema Loristo of MMDA Metrobase said that they anticipated heavy traffic along the roads leading to MOA because of the concert and protest actions against it.

She said that they will deploy enough MMDA traffic enforcers around MOA to handle the traffic situation.

Pasay City police non-uniform personnel Buen Concejo, meanwhile, said that 25 Civil Disturbance Management officers along with some 50 district and regional police officers will be deployed in the area until Tuesday to handle protest groups who planned to hold protests.

Among the groups were the BibleMode International founded by former Congressman Benny Abante and the BibleMode Youth Philippines.

“But since these are religious groups, we expect their protests to be peaceful naman,” she said.