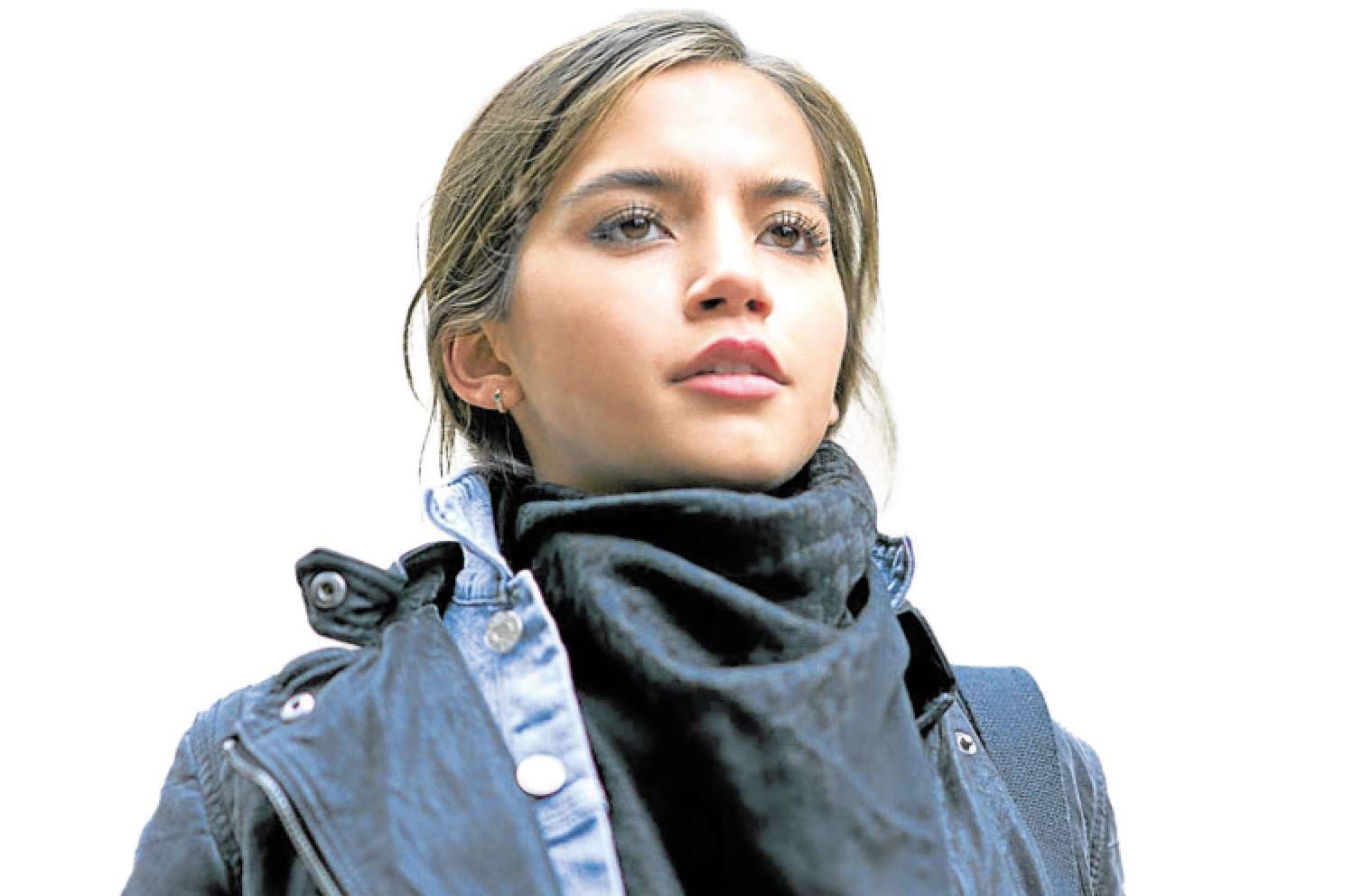 What do you do when big business uses science for profit more than service? In “Sweet Girl,” which launches on Netflix today, a man named Ray Cooper (Jason Momoa) takes matters into his own hands after his plea for help falls on deaf ears.

When his wife (Adria Arjona) falls victim to a pharmaceutical company’s greed, Ray, with his daughter Rachel (Isabela Merced) in tow, embarks on a do-or-die mission to hold the people responsible for her death into account.

“Hopefully, audiences will take away from this film a new perspective on pharmaceutical companies,” Isabela Merced told Inquirer Entertainment in a one-on-one interview last Monday. “That and not blindly trusting politicians, who are just not my favorite people these days.

“And I hope people learn to second guess things and not just take what they’re told as it is. Do your own research. I don’t think you have to go as far as killing people for justice. But there are other ways that you can go about that for the people you love.”

Before “Sweet Girl,” Isabela made a name for herself for her lead roles in Nickelodeon’s “100 Things to Do Before High School,” Michael Bay’s “Transformers: The Last Knight” and as the live-action iteration of Dora the Explorer in 2019’s “Dora and the Lost City of Gold.”

In a separate one-on-one interview last week, debuting feature-film director Brian Andrew Mendoza told us that he hoped “Sweet Girl’s” universal message about family, the health-care system and “public service, with strings attached” will resonate with viewers because of the emotional journey the characters in the movie go through.

“It’s important for everybody to always question what’s happening around you, right?” he said. “[Our mind] is not designed to be complacent. You have to question if something is good for you or not.”

Isabela added, “This was shot before COVID, mind you. We were almost done with the movie when we got the news that there was an outbreak in China, and I was like, ‘There’s no way it’s going to get to us.’ Now, it’s as relevant as ever, this situation we’re in, and how it’s like, ‘Oh, trust us.’ But why should we trust you with the lives of our loved ones, right?”

It was important for Brian to send the movie’s message across in as clear a way as possible—which is why the chemistry between Jason and Bela is crucial for the movie to work.

When we asked Bela if she wasn’t intimidated by the 6-foot-4 tall Jason the first time she met him, the actress said, “Jason was super nice and warm and fun—and he gave hugs, which was super cute. If anything, I was worried I would intimidate him (laughs). Apparently, I’m very intimidating—I’ve been told that before, but I don’t see how.

“But it does take me a while to warm up to people if I don’t know you or if you don’t know my humor. So, the first time I met him, I was just feeling it out. I had already spoken to him briefly, because he invited me to be on the project. He texted me, so we were already chatting.

“But the first day I met him, I was doing fittings, and then he walked in dressed like how his character dresses in the movie. I feel like that’s how he dresses in real life, and we looked like the father-daughter characters in the movie. 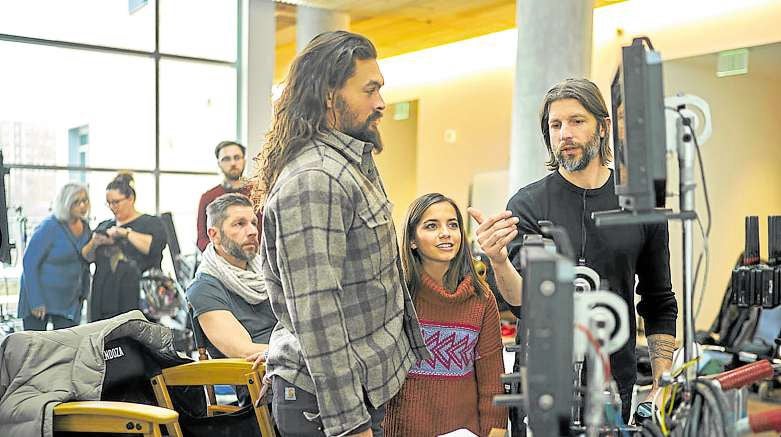 On the set with (from left) Jason Momoa, Isabela Merced and director Brian Andrew Mendoza

Excerpts from our Q&A with Isabela and Brian:

Brian, given your previous collaborations with Jason, it’s safe to say you know him close enough and really well. How different is Jason in this particular project?

Brian (BM): First off, the setting is contemporary—Jason doesn’t play a lot of contemporary roles, except when he’s playing a superhero (in “Aquaman”). But this role of Ray Cooper is blue collar—he’s a working man, and there’s a side to that character that is part of who Jason is. I felt like this character will show a side of him that people haven’t seen before.

I read that your baby was born right before filming. Is that partly the reason why “Sweet Girl’s” theme about family resonated with you, Brian?

BM: My wife gave birth to our son a week before production, so it was definitely a roller-coaster ride for me (laughs). It’s funny because when the trailer came out, there were a lot of memes about Vin Diesel from “Fast and Furious,” and how we fight for family.

In any case, family is the most important thing you have, and how you raise your kids is important. The father-daughter aspect of it really allowed us to explore that dynamic, especially when that is flipped on its head once you get to the twist in the last 20 minutes of the film.

We finished the shoot two weeks before the pandemic hit, so we barely managed to slip through the window. But what was most satisfying about the whole experience was being able to shuttle between the action and the heart of the story. You’re always worried if you’re going to get it right, and I feel like we pulled it off as a team.

Isabela, what have you learned from shooting this film?

Isabela (IM): Personally, I’ve learned what else I could handle. Before starting the movie and doing all those stunts, I was really worried that I couldn’t pull it off. I’ve never done that much action in the movies, and I wasn’t sure I’d be able to actually do it by myself.

So, it was very stressful on the day of those action scenes—we were fighting in the water, and I’m fighting a 6-foot-tall man. The fact that I made it through, and it turned out looking great, that really taught me how much more capable of things I could be.

There’s a beautiful line in the movie that says, “There are memories that shape us, mold us into what we become—a mosaic of our different experiences.” Is this true in your case, Isabela?

IM: Yeah, 100 percent. I mean, I really can’t remember things very well, so if I’m able to take pictures, I will take as many pictures as I can. But I think memories have a lot to do with who we become, particularly those that either traumatize us or change us, and those that really define us.

In Rachel’s case, the happy days kept her going as much as the sad days that she witnessed, like losing loved ones—and that’s something really powerful. Her drive was fueled by both. So, it’s important to have both.

Isabela, you do so many things. You’re only 20, but you act, sing, write your own songs, you even performed with Ricky Martin in “Evita” on Broadway. Where is all that drive coming from?

IM: I’m just so excited by the world and am fascinated by a lot of things. I learn new things every day. I’m way too excited to just sit back and do one job or pursue one goal, because I have so many—and I can’t keep track of them all! But I know I’m going to get most of them done.