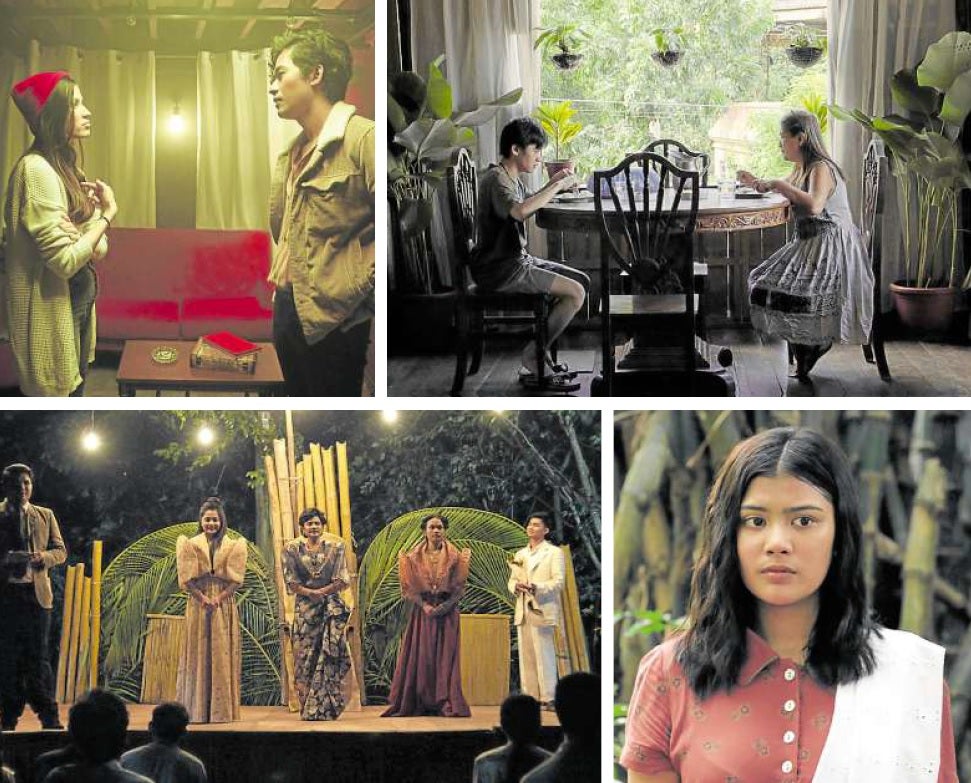 Scenes from (clockwise) David Olson’s “The Dust in Your Place,” James Fajardo’s “Looking for Rafflesias and Other Fleeting Things” and Myra Aquino’s “Beauty Queen”

The pandemic lockdown and working under challenging weather conditions have brought out the best in terms of creativity from three young filmmakers—David Olson, James Fajardo and Myra Aquino—whose short films are competing at the ongoing 17th Cinemalaya Philippine Independent Film Festival.

David’s “The Dust in Your Place,” James’ “Looking For Rafflesias and Other Fleeting Things,” and Myra’s “Beauty Queen” are among the 13 finalists battling for the Balanghai trophy in the monthlong indie fete.

‘The Dust in Your Place’

“It’s been challenging, but in a good way,” said David, when Inquirer Entertainment asked what it was like for him to shoot his 20-minuter, which revolves around two people—a comic strip illustrator and her writer.

After witnessing an awkward fight between the writer and his girlfriend, the comic strip illustrator decides to tell the former what she thinks is the flaw in all of the guy’s past relationships. The conversation explodes into a discussion on relationships, social norms, their history and their possible future, and it becomes increasingly clearer that the trajectory of their career and friendship are on the line.

“Shooting during the middle of a pandemic has been a big difficulty in every shoot that my company, Cutaway, and I have done since 2020, or when the lockdown started. But I’ve found creativity tends to find a way to reveal itself during the most strenuous of times,” said David, who has been working in the industry for 10 years now as a director, cinematographer, editor and producer.

When asked why he decided to join Cinemalaya this year, David replied: “It was all born from me and my producers (Warren Carman, Michael Stamati, Joaquin Coromina and Andrew Ramsay) while hanging in a garage late one night. I stumbled across the Cinemalaya request for submissions and we made a snap decision to spend the next six days making a 20-minute short for a festival that we admire with a cast and crew we’re all very proud of.”

‘Looking for Rafflesias and Other Fleeting Things’

Meanwhile, James believes that Cinemalaya is “a good platform in order for our film to reach a wider audience. I believe that the film’s message is relevant and that it is important to be seen by many people.”

“Looking for Rafflesias and Other Fleeting Things” is a story of a tikbalang (horse demon) named Gubat, who transforms into a teenage boy to search for the truth after it was mistakenly blamed for various killings in the forest. In the mountain, he meets Darren, an American botanist looking for rafflesias. His interactions with the American unravel his inner desires. This pushes him to reveal his identity to Darren and in turn put his life at risk.

“Since the opening of Cinemalaya last Aug. 6, our film has received mixed reviews, most of them are negative,” admitted James. “I’m hoping that through this Cinemalaya experience, I’d be able to improve my skills in storytelling and more importantly, to increase my mental toughness in handling those constructive criticisms.”

James recalled shooting the film in December 2020 “under the new normal setup.” He explained: “Given the limited time allowed per shooting day, we had to drop several sequences so we were revising the script while shooting. I had to make a lot of adjustments during the editing to make the narrative work. Also, we weren’t able to cast a real American actor to play Darren so it was one of the challenges that we faced.”

Myra likewise recalled encountering challenges in making her 18-minuter, more so because it is based on a true story. It is a chapter in the life of the Filipino revolutionary Remedios Gomez that took place in Pampanga in 1940.

“During the research process, it was difficult to unearth more information about Remedios, but we eventually discovered a biography on her that was written by her brother Andrew,” recalled Myra, who graduated in 2020 with an MFA in directing from the UCLA School of Theater, Film and Television.

“I also interviewed relatives of Kumander Liwayway, and read some books about the Hukbalahap resistance and World War II in the Philippines to learn how to bring texture and authenticity to the film. I also don’t speak Kapampangan, so I initially wrote the film in English, and then it was translated to Kapampangan,” said the Filipino filmmaker who grew up in Guam.

“For the shoot itself, we went into production during monsoon season, so I was constantly worried that the weather could potentially compromise the shoot. In the end, we were really lucky in that we were able to shoot right between two storms. Additionally, we shot in the jungle, in the same mountain the story took place decades ago (Mt. Arayat in Pampanga), and dealt with rain, muddy terrain, mosquitoes and ants, among other things. It is a testament to how hardworking and resilient the cast and crew was because they were working for long days, under very challenging conditions.”

For Myra, joining Cinemalaya is a no-brainer. “I wrote and directed the film primarily for the Filipino audience, and for members of the Filipino diaspora … I knew that the opportunity to share the story of Kumander Liwayway [at the Cinemalaya] would be amazing,” she pointed out.

Myra said this was her first time to participate in a Filipino film festival “at such a large scale.” She said: “I’m open to whatever this experience will teach me, but I’m personally very curious to see how others respond to the film, and I’d like to engage with that—regardless of whether the feedback is positive or negative.”

The Cinemalaya finalists are currently being streamed via ktx.ph. For more updates, visit the Cinemalaya website https://cinemalaya.org.

TAGS: 17th Cinemalaya Philippine Independent Film Festival, Looking for Rafflesias and Other Fleeting Things, The Dust in Your Place