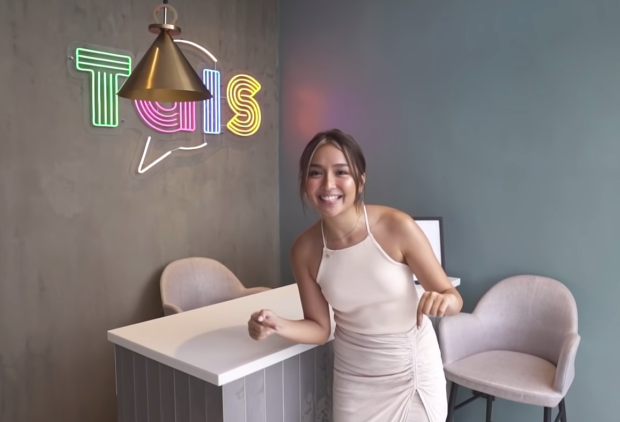 Kathryn Bernardo gave fans a look at her own vlogging and taping studio, which she describes as her “new favorite tambayan.”

“Finally, here’s a closer look at our studio a.k.a. our new fave ‘tambayan’ (hang out spot),” the actress said through her YouTube vlog last Saturday, Aug. 14.

The studio welcomes guests with a neon sign for the actress’ weekend vlog “TGIS” and features its own gazebo, garden and conference room. Bernardo also gave a glimpse of her makeup and wardrobe room, which has its own receiving area, vanity set and a changing room.

“This is like my second home simula nung ginift sa ‘kin ni Mama ‘tong studio na ‘to (since Mama gave this studio to me as a gift), so I’m really, really happy,” she added, noting that the studio has been a convenient venue for her most recent vlogs.

Bernado then showed her black-and-white-themed main studio area, which remained bare even after construction. She said the place has been left unfurnished on purpose to make way for photographers and vlog guests.

“We really want the photographers and sino man ang papasok na mayroon silang enough space dito. ‘Yung mga doors dito and windows are all open because we really like natural light, especially for photos,” she explained.

(We really want the photographers and whoever comes in to have enough space here. The doors and windows are all open because we really like natural light, especially for photos.)

Bernardo added that the studio not only served as a space for her work, but also as a venue for some intimate gatherings with her family.

The actress has decided she will be putting the studio up for rent this year, so other artists can also experience it.

Bernardo’s mother Min, her boyfriend and fellow actor Daniel Padilla, and members of her glam team secretly worked on the studio, which started construction in October of last year. It was gifted by Min to her last June for the actress’ commercials, pictorials and vlogs.

This comes after Bernardo gave a glimpse of her dream house currently under construction. She first showed its groundbreaking ceremony at an expansive lot in March last year. JB