19 honorees to be feted in NCCA triennial awards 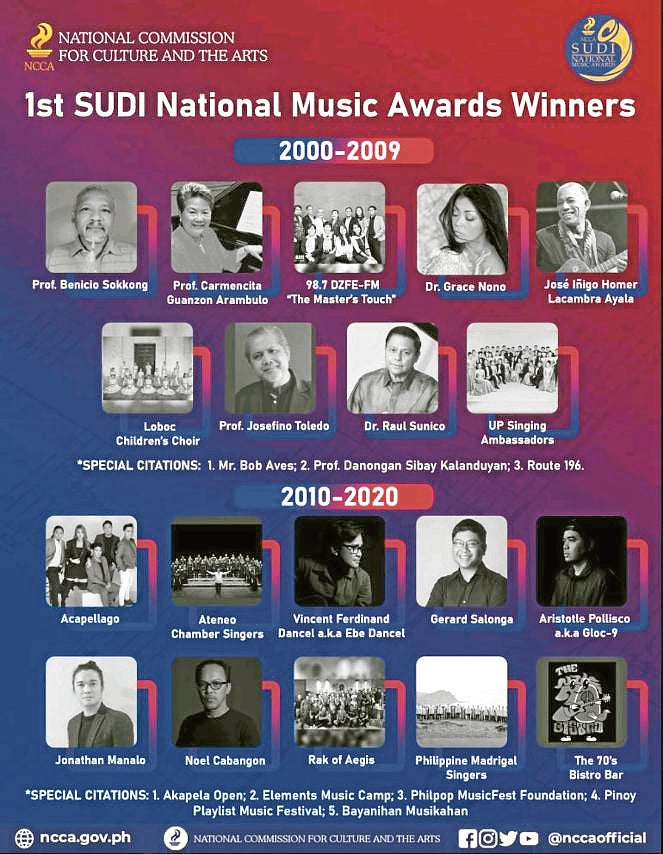 For its inaugural edition, the SUDI Awards will honor the contributions of 19 Filipino artists, musical works, cultural workers, researchers and institutions that have exemplified “the highest standards and artistic excellence” in the past 20 years.

Launched by the National Commission for Culture and the Arts (NCCA), the award-giving body will hold a two-part, virtual awarding ceremony on Aug. 21 and 28 at 7 p.m. on the organization’s official Facebook page and YouTube channel.

The 2010 to 2020 roster, on the other hand, is composed of the Ateneo Chamber Singers; Ebe Dancel; Gerard Salonga; “Rak of Aegis”; Gloc-9; Jonathan Manalo; Noel Cabangon; the Philippine Madrigal Singers; and The ‘70s Bistro Bar.

The winners will be featured in a special two-episode podcast, which will be published on Aug. 15 and 18 on Spotify and Apple Podcasts.