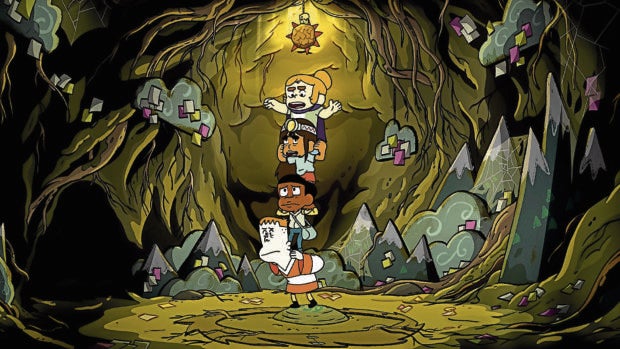 Scene from “Craig of the Creek” —PHOTOS COURTESY OF CARTOON NETWORK

The animated TV series “Craig of the Creek,” which is aired on Cartoon Network and HBO Go, follows 9-year-old Craig Williams and his playmates Kelsey Pokoly, 8, and JP Mercer, 10, as they play games with other kids and embark on different adventures at a creek in Herkleton, Maryland.

It doesn’t take long before you realize there’s more to the trio’s shared stories than mere child’s play. The staff-wielding, math-loving Craig, the group’s de facto leader, often takes the purple cape-wearing Kelsey, with her budgie in tow, and the tall and awkward JP with him wherever he goes.

Together, Craig (voiced by Philip Solomon), JP (H. Michael Croner) and Kelsey (Noel Wells, and George Kidder in the pilot) explore uncharted territory and evade the map-seizing Honeysuckle Rangers (in “The Other Side”), demonstrate the practical use of math while uncovering ancient treasure (“The Last Game of the Summer”), examine touching coming-of-age moments (“Craig and the Kids’ Table”) or tackle the power of a child’s imagination (“The Ground is Lava”).

“Craig of the Creek,” created by Matt Burnett and Ben Levin, debuted in December 2017 and is now airing its 20-episode third season. The GLAAD- (yup, Kelsey is a lesbian) and Daytime Emmy-nominated show has been renewed for Season 4.

As proof of its popularity among young viewers, a spinoff series “Jessica’s Big Little World,” which turns the spotlight on Craig’s smart and precocious younger sister Jessica, has been greenlit and is currently in production.

Brand-new episodes of “Craig of the Creek” are telecast on Cartoon Network at 2:15 p.m., on Saturdays, while Seasons 1 to 3 are available for streaming on HBO Go.

We got in touch with the show’s supervising director Tiffany Ford, an American illustrator, storyboard artist, writer and director who was twice nominated at the 2021 Annie Awards for her work on “Craig.” 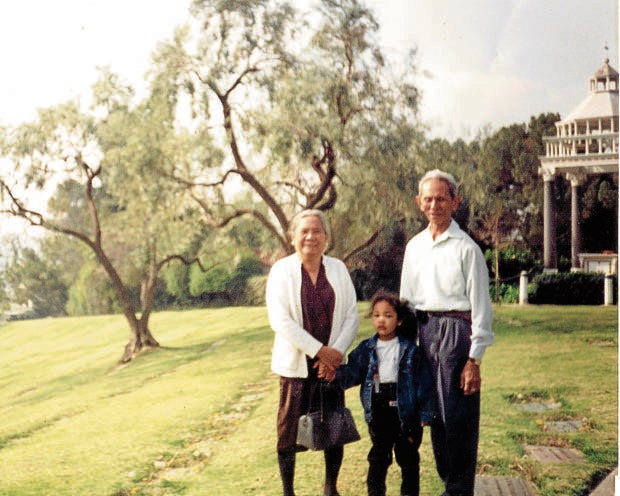 Ford as a child (center), with her Filipino grandparents Francisco (right) and Benigna Barriga

Asked how the series manages to channel a child’s mind-set to tell stories that feel like they’re genuinely lived-in tales, Tiffany said, “We’re lucky enough on the ‘Craig’ crew to be able to play and have fun while we work on these episodes.

“Much of what we put down on paper comes out of the natural play that happens in the writers’ room, in the individual offices and the common spaces, where folks on the show hang out, get to know each other and become friends. I believe the relationships we build within the show are reflected in the series—and it shows in our stories.”

What made this interview doubly fascinating was that Tiffany is part-Filipino—whose grandparents helped raise her!

“My grandparents, Francisco ‘Kikong’ and Benigna ‘Bening’ Barriga, came to the US from Danao, Cebu, in the early ’90s to help my mom raise me,” she said when asked to talk more about her Filipino roots. “They were already quite elderly when they came to help out, but they taught me a lot, and we were very close.

“My Lola Bening was very kind and patient, and let us have fun and be ourselves. My Lolo Kikong was hardworking, even in his old age, and taught me things like how to garden, how to cut wood, and resourcefulness. They were funny, kind and endlessly generous. 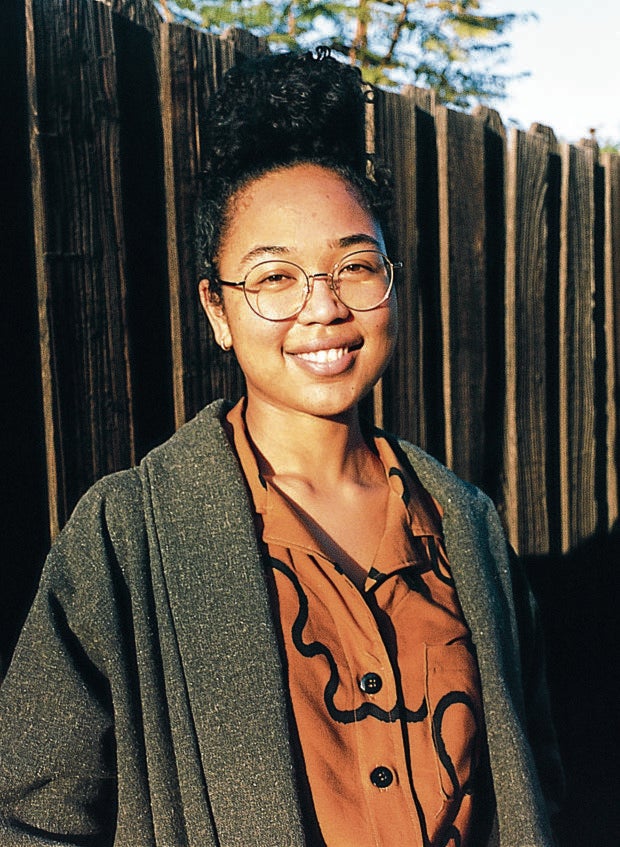 “My Lolo saved up spare dollars here and there, and bought me pencils and papers because I loved drawing so much. They spoke very little English, but still came to meet my teachers at back-to-school night, and did their best to represent my parents. I feel unbelievably fortunate that I had the opportunity to know them as closely as I did.”

More from our Q&A with Tiffany:

What can fans of the show expect from Season 4, particularly in terms of plot and themes?

The stories are always packed with lore, quests and adventures, in addition to cool characters we get to meet along the way. Season 4 will have even more new adventures, as well as cool new friends, while embarking on an exciting quest to find one of the Creek’s greatest treasures. In creating these tales, we always try to draw from real-life experiences, and we hope that the audiences can feel a sense of relatability.

What kind of satisfaction do you get out of the show? Of the three main characters, whose personality resonates with you the most?

I love working on “Craig of the Creek” for its dedication to representation, its funny storytelling and the sweet and earnest meanings behind so many of its episodes. Most of all, the amazing crew is what inspires me most about the show.

I can relate to small parts of each of the main characters: I feel similarly to Kelsey, in that she is dedicated to her imagination and believes wholeheartedly in her own story; I relate to JP, in his oddball interests and sincerity in what he enjoys; and I relate to Craig, whose hyperfocus and dedication to a craft reminds me of how I felt as a kid wanting to practice drawing and other activities just for the sake of improving.

In these three characters, I admire their loyalty to friendship, which inspires me to continue being a good friend to others.

The show has a lot of wonderful, even moving episodes. Can you name your top three favorites?

While it’s very hard to pick among so many gems in the show’s history, there are moments from each episode that stay close to my heart. The three that stand out are “Family Dinner,” “Ground is Lava” and “Ace of Squares.”

“Family Dinner” was one of the early episodes that I worked on as a storyboard artist, and we were able to include a lot of personal details from our own families, share them with Craig, and help build that episode. 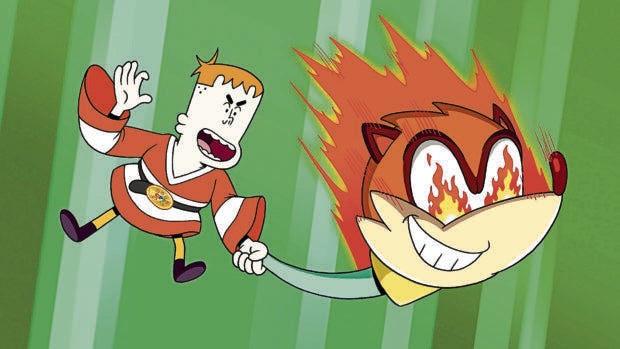 JP (left) takes matters into his own hands

“Ground is Lava” and “Ace of Squares” are two episodes that always hit home for me as they are earnest stories about kids playing. In both, the game becomes real and all-engulfing, and were just so fun to watch from their inception.

You’ve been twice nominated for your work on “Craig” at the Annies. How did you discover your passion for illustration?

I always liked to draw, always enjoyed trying new things and always had a lot of energy. My mom helped channel that energy into drawing and art making, but I don’t think she expected my interest in art to take off the way it did. Growing up, I was interested in anything animated, and as long as it was some kind of cartoon or comic, I was into it and wanted to learn more.

When was the last time you visited the Philippines?

You are one of the creators of the upcoming spinoff “Jessica’s Big Little World.” Of all the characters in “Craig of the Creek,” how did you end up singling out Jessica, knowing that she’s just a wee bit younger than 8-year-old Kelsey?

Jessica is Craig’s little sister, and has had some special moments in the show. Like so many of the characters in the series, Jessica is funny and sweet, and has shown some true kid energy through her presence on the show. She is spirited, curious and ambitious, and can represent a lot of people.