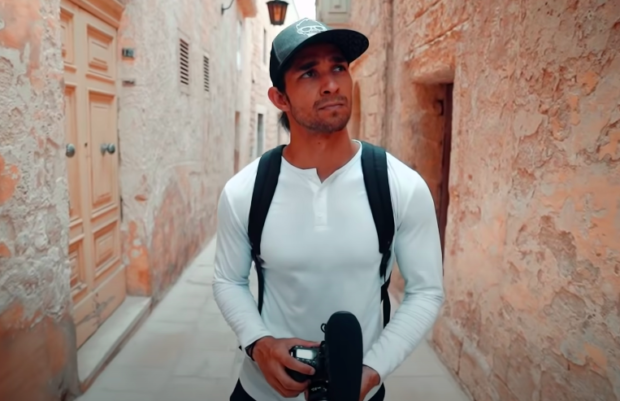 Wil Dasovich was hailed the champion at the recent Vlogfest Malta 2021, which came with a generous prize of $30,000 (around P1.5 million).

Dasovich announced the good news via Instagram yesterday, July 15, noting that this is the first time he has ever received an award “that came with a bag.”

“This entire Eurotip has been one of the most incredible travels of my life and to be honest, before heading on this trip I’d barely even heard of Malta! [Laughing emoji] but after weeks on this island I can definitely say it’s one of the most unique countries I’ve been to and Valletta is on my top [five] must see cities in the world!” the vlogger shared.

“[I’m] gratified through the roof to be casted in this creative group of filmmakers who were all able to showcase this lesser known gem of the Mediterranean in their own customized way of storytelling,” Dasovich added.

Aside from Dasovich, his sister Haley and friend Daniel Marsh – who are vloggers as well – submitted their own entries at the said competition, which was held from July 9 to July 14.

In the next post, Dasovich revealed “another side of the creation process” of his vlog entry, admitting that he had had moments of “self confrontation where you have to ask yourself how much you really enjoy the whole process & is it worth the stress?”

“While people were out having the time of their lives in the vibrant town of St. Julians, I remained in dark solitude working on that bloody video trying to create a story with meaning. These long hours entail a necessary amount of mental suffering. Nevertheless, temporary suffering is the only path to long term fulfillment,” he stressed.

“The video I created for @thevlogfest captures my inner feelings about the cognitive dissonance I face on a regular basis in trying to live a healthy & productive life vs trying to simply, LIVE,” Dasovich emphasized.

He also explained that while his vlog “was about breaking discipline, it is ultimately discipline that allows me to live freely.”

“Discipline = Freedom, and only until you’ve solidified your routine is when you shall have the authority to break it! And once you’ve reached that level of discipline, don’t fall into the trap of monotonous productivity because productivity doesn’t translate to life,” Dasovich explained.

Dasovich competed with nine other vloggers including Haley and Marsh in the said competition.

The said vlog fest’s goal “is to show our host nation to the world through authentic experiences, captured without duress, without interference, and at the pace and choice of our contestants,” according to its official website.  /ra