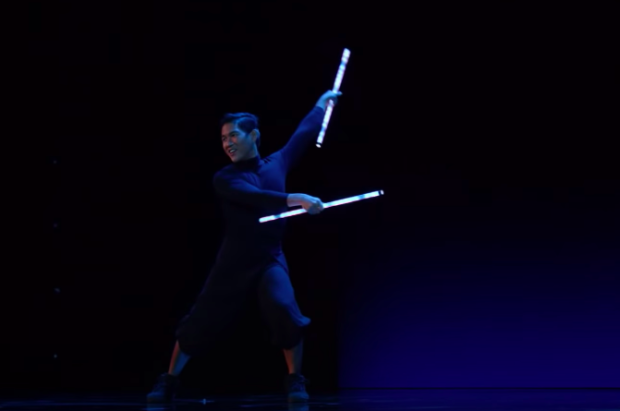 Ocampo’s magical performance premiered on the show’s YouTube channel as an early release last Monday, July 12, before it was shown as part of the Tuesday episode.

Ocampo, an Advertising Arts alumnus of the University of Santo Tomas, admitted that he “gave up everything” to pursue his career as a performer.

“People thought I was crazy. I didn’t think I’ll make it here. But my friends and family, they supported me and they inspired me to fight. I am here fighting for myself, my family, my friends, my community, my country,” he told judge Sofia Vergara after she asked him why he tried out for “AGT.”

Ocampo’s masterful leviwand control combined with his dancing and acrobatic skills impressed the whole crowd, including the judges–Vergara, Howie Mandel, Heidi Klum and Simon Cowell. They all gave Ocampo a standing ovation right after his performance.

Ocampo, however, almost stepped out of his “AGT” journey after accidentally injuring himself while practicing a difficult move earlier this year.

“It was March 19th when I was practicing a split jump going into a backflip (a move that’s not foreign to me) that I slipped and landed on my head,” Ocampo shared on July 13 via his Facebook page.

“My nose bled profusely, vomited a ton, and was experiencing the biggest, most painful headache. I was in the hospital for seven days, could barely sleep due to the pain despite the insane amounts of pain killers they injected me and made me take,” he recalled.

TRIGGER WARNING: around February to March 2021, I was training for @agt . I knew I had to represent well and needed to…

“The week I was in the hospital was such a low week. I was due to fly out for AGT on March 31 (I was discharged March 27), and I didn’t think I could perform due to the headache, dizziness, and disorientation,” Ocampo said.

“I have also been unemployed for over a year at that point and have used up most of my emergency funds for hospital bills and medicines. All these plus knowing that a couple of folks close to my heart have passed away due to COVID complications,” he added.

Fortunately, Ocampo received “emotional, physical and financial” support from his friends, relatives and others.

“The fire in me was rekindled and I knew I had to keep fighting not just for myself, but also for them. Besides, I was given a second chance at life, and I shouldn’t waste it. The power of community is always the most powerful,” he emphasized.

Prior to joining “AGT,” Ocampo had previously shared his talent internationally as a performer for Cirque du Soleil.  /ra