POOLS are perfect for her “Little Mermaid”-themed debut next year.

It’s a rare blessing, she said. Not all teenagers can call themselves a proud homeowner at such a tender age. She’s 17.

GMA 7 teen star Joyce Ching made that big leap after only seven years in show business.

She and her parents personally took care of the interiors. Mom and dad visited local malls for the furnishings and decor, like the framed drawings of European churches in the dining area. They bought the dining set from SM; the sofa set from Automatic Center. The bean bags are Joyce’s picks. “I like sitting on these while watching TV,” she said.

“It was my husband’s idea to install mirrors and unique light fixtures,” mom noted. “The mirrors make the place look bigger.”

The unit is only 58 square meters but it’s “just right for me and my family,” said Joyce. She described the condominium complex as a “resort in the middle of the city.”

There are swimming pools in the compound, plus a basketball court and a gym. “It’s very quiet here,” she said. “I feel safe. Plus, it’s accessible and situated near malls and the studio.”

Joyce decided to move in upon the suggestion of a cousin who also lives in the complex. “It’s a good investment, too,” she said. “Before, I dreamt only of owning my own car.” She did that recently as well; she now owns a white CRV.

“It’s a great feeling,” Joyce said of having her own home and vehicle. “I can see where my earnings are going.”

ENTRANCE to the function room, where her surprise birthday party was held last January

Through her parents, Joyce learned to appreciate the work of lay evangelist Bo Sanchez, also an entrepreneur and author whose books instilled in her a healthy attitude toward money and kept her grounded in the oftentimes crazy world of show biz.

She has counseled other young people to shun materialism, and calls herself a “practical” person. “I don’t buy anything on impulse. I don’t go for luxury brands. I prefer to save my earnings,” she noted.

When she was a kid, her parents refused to buy her Bratz and Barbie dolls: “They said those toys were too expensive, that I’d soon get tired of them.” As luck would have it, she started receiving lots of dolls and stuffed toys from fans and co-workers when she joined the biz.

DECORATIVE balls from the mall

When she earned her first paycheck, she gifted herself with a My Scene doll— with mom’s approval. The girl clearly deserved a little reward every now and then; she had been working since age 10.

After a series of TV commercials (for banks and colognes), she was cast in the GMA 7 gag show “Bubble Gang Jr.”

When she reached the awkward tween years, Joyce stayed on course. And then she hit the jackpot when she joined the program “Tween Hearts.”

Apart from “Tween,” a weekly youth show, she is seen regularly in the afternoon soap opera “Broken Vow” and the weekly variety show “Party Pilipinas.”

CABINET stands against a mirror that makes the room look bigger.

Joyce admitted that “Tween” turned her world upside down. She was hyperactive as a kid, she recalled. “But when I became a teener, I became quiet and reserved.”

Joining “Tween” and being surrounded by young stars her age, encouraged her to be more outgoing and assertive.

She also gamely ventured out of her comfort zone and played a contravida in the afternoon soap “Ikaw Lang ang Mamahalin.”

HER BEDROOM is a sanctuary. She used to share one with her siblings.

Playing a bad girl was “challenging,” she remembered. “I was always screaming and scheming. I was not used to it.”

She relished portraying a complex character, though. “She started out as a good girl, but she got obsessed with wealth. She changed. The soap taught me the importance of knowing my character’s story.”

It pushed her as an actor, she said, especially since she frequently shared the screen with veterans like Gardo Versoza: “Kuya Gardo gave me precious tips: I should feel the scene. I shouldn’t force things. Let the emotions flow naturally. When I fell short in a scene, he would tell me to try again.” She appreciated his honesty. 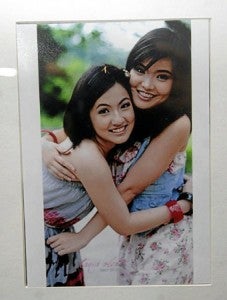 On top of her show biz commitments, she recently went back to school to take up Culinary Arts in SKD Academy in Quezon City.

Joyce knows her way around the kitchen and wants “to develop” her love of cooking. Mom has shared some recipes with her. “My favorite among my mom’s specialties is spaghetti.” Her mom can also whip up a mean nilaga, fish sarciado, and tinolang manok, she said. “I have cooked those dishes, too.”

Her week is invariably crammed with tapings and school work, so she looks forward to lazy days at home.

Since moving to the new condo, she has become a homebody: “In the past, I would often drag my mom to the mall. Now I’d rather hang out at home … or in my cousin’s pad nearby.”

Her favorite nook is her bedroom. “When there’s no work, I sleep all day,” she said. “My room is so relaxing that I feel sleepy in there.”

In their old house, she shared a room with her siblings. “I’m glad that I now have my own room,” she said. “I could do what I want with it and decorate it my way.”

RETOUCHING her makeup in the washroom

True to form, the room is girly and dainty—filled with all sorts of dolls and other souvenirs from the biz. Aside from My Scene dolls, she has Barbie, Sponge Bob and Hello Kitty toys.

“I won the Barbie doll in ‘Bubble Gang Jr.’ I was the Most Behaved in the cast,” she said.

When “Tween” had a taping in Enchanted Kingdom, she played one of the amusement park’s games and won a Sheldon J. Plankton stuffed toy.

BEAN bags in the living room were her personal picks.

Plankton—the antagonist in the cartoon series “SpongeBob SquarePants”—is her favorite cartoon character of all time.

Her Plankton dolls come in all sizes, she said. “I got the small one in Glorietta; the medium-sized one from Star City. The biggest was a present from a fan who bought it in SM North Edsa.”

Her fans also gifted her with her portraits that now hang in the bedroom.

She pointed out that the members of her fans’ club, Ching Lovers, are not only loyal; they are quite generous as well. They threw a surprise birthday party for her when she turned 17 last Jan. 5.

“They planned it with my dad,” she recounted. “After dance rehearsals for ‘Party Pilipinas,’ my dad told me to go to my cousin’s condo unit. Turned out, they were preparing and decorating the country club for the party.”

When she turns 18 next year, Joyce said she wants to have a “swimming party,” which is just perfect since there are several pools in the compound. “I want a princess theme for my debut. ‘The Little Mermaid,’” she said.

DINING table was a mall find.

The party will still feature a traditional 18 Roses dance, but it will be more laid-back and tropical in motif. “I don’t know how to swim, so I will just stay in the children’s pool,” she quipped.

She apparently enjoys the outdoors. Last year, “Tween” taped the annual summer episode in Boracay—a special treat for Joyce and her friends in the cast. This year, the show’s summer special was taped in La Virginia Resort in Lipa, Batangas.

AT THE playground in the condo complex

She dreams of vacationing in Caramoan, Camarines Sur—she’d really rather go beachcombing. But “Tween” costar Derrick Monasterio made her curious about Europe: “He had lots of stories about his trip to Paris, with Enzo Pineda and Sarah Lahbati. He said the Eiffel Tower was awesome. He gave me an Eiffel keychain as souvenir.”

This summer, she and her family went to White Coral Beach in Bataan. “I got to touch a tortoise for the first time,” she said. Then they drove up to Baguio. “It was tiring but fun,” she said. “It’s great that I got to spend time with my family.”

Next year, she hopes to take them to Puerto Galera in Oriental Mindoro. “We know someone who owns a resort there that’s so peaceful and beautiful,” she said.

Then again, since she now lives in an urban resort, every day is a summer holiday for Joyce.