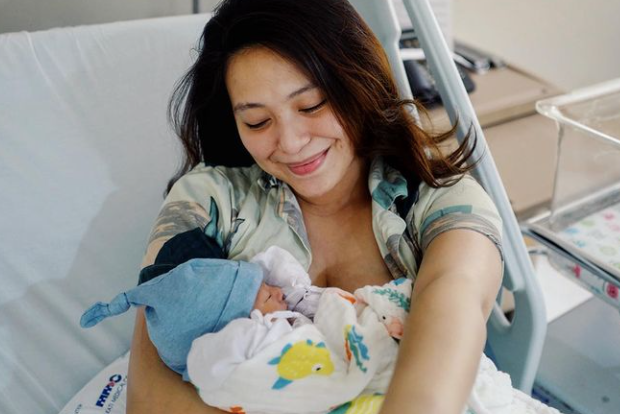 Celebrity couple Joyce Pring and Juancho Triviño are now officially parents as they announced the birth of their first child Alonso Eliam.

“July 2, 2021, we welcomed our firstborn son, Alonso Eliam Pring Triviño to this world. Guys, na witness ko lahat at ang masasabi ko lang, this is a feeling that [I] never had before,” the actor revealed as he showed a photo of Pring cradling their baby, through his Instagram page today, July 5.

(July 2, 2021, we welcomed our firstborn son, Alonso Eliam Pring Triviño to this world. Guys, I witnessed it all, and all I can say is that this is a feeling that I never had before.)

He also admitted that he “froze to death” upon seeing his wife deliver their child, but hearing Alonso’s first cries “took [his] breath away.”

“I will always thank God for everything and now especially the gift of Life,” Triviño added. He did not state where their child was born, but based on the prints on the TV host’s pillow, she gave birth at Makati Medical Center.

Meanwhile, Pring showed a photo of their son’s hand as she wrote an open letter to him through her Instagram page, also today.

“Here you finally are, cradled in my arms, taking Mama and Dada’s breath away with every coo, every movement, every little magical thing about you,” she said. “There has never been a more joyful time in our lives — and we’re just so blessed our amazing God has chosen us to be your parents.”

She also stated that her son was born through normal delivery in the early morning of Friday, July 2.

Pring and Triviño met on GMA’s morning show “Unang Hirit” before tying the knot through a garden ceremony last year. They announced last February that Pring was pregnant with their first child. JB

Read Next
Kris Bernal scammed, fell victim to 23 food deliveries from fake bookings
EDITORS' PICK
DOH: Too early to say COVID-19 cases are declining
Over 3 Million worth of prizes to be won at Smart Padala’s SENDali Manalo Promo!
Gov’t rolls out COVID-19 vaccination in select pharmacies on Jan. 20 to 21
COVID-19 cases in City of Manila are decreasing, says OCTA
The best of bayside and city living at SMDC’s Sail Residences
Acer starts the year off strong with the Aspire Vero National Geographic Edition
MOST READ
Comelec junks petition to scrap Bongbong Marcos COC
In Batanes, octogenarian dies of COVID-19
Marcos Jr. visits Cebu, stands as ‘ninong’ to mayor’s son
When to get boosters after positive COVID test
Don't miss out on the latest news and information.