Newlyweds Joyce Pring and Juancho Triviño flew to Coron, Palawan, for their honeymoon, weeks after they tied the knot on Feb. 9 in a garden wedding at the Sofitel Philippine Plaza Manila in Pasay City.

Pring took to social media to give fans updates and snippets of their getaway, which started yesterday, Feb. 28.

“Peace out, Manila! Out for the weekend. 😜#joythtotheworld #travel,” Pring said on Instagram yesterday.

Fans would also have something to look forward to after their trip on Pring’s or Triviño’s YouTube channel, as the couple will also be vlogging throughout the whole trip, Pring told a fan who requested that they do so. 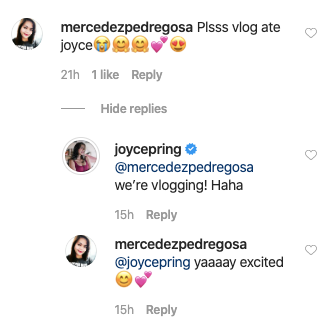 The television host also took to Twitter yesterday to share snippets of the trip while calling themselves “honeymooners on the loose.”

The first photo appears to show the newlyweds riding on a boat, while the other one shows them waiting at what seems to be an airport terminal.

It is no secret that Pring loves traveling, and she expressed her gratitude to God for giving the couple a “chance to create new memories” together.

“[S]o in awe of the work of Your hands. By the word of the LORD the heavens were made, and by the breath of his mouth all their host. (Psalms 33:6, ESV),” she said on Instagram yesterday.

Pring’s message came with a photo of the picturesque beach from her perspective–she can be seen chilling under a shade while reading a book.

Through her Instagram Stories, the wife shared with fans the “new faces” of her husband that she only just now saw for herself: Triviño’s “bagong gising look” and the “singing while super oily from humid weather look.”

Even though the two are on vacation, it seems that work never stops, as shown by Pring via another Instagram story. She, however, said that they were working “joyfully.”

Pring and Triviño have been co-hosts on GMA’s TV morning show “Unang Hirit” since 2018. They got engaged on Aug. 3 last year in Boracay, but only went public with it later in November.  /ra