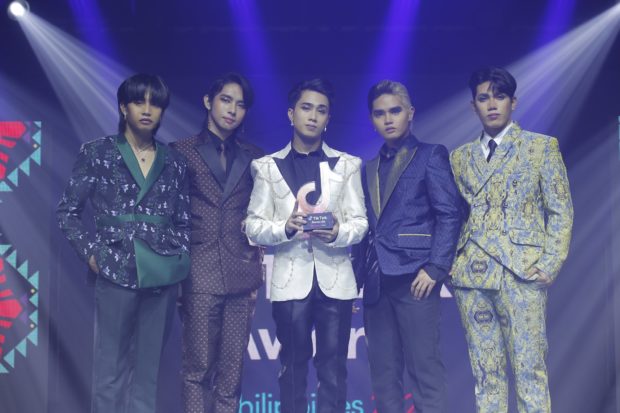 P-pop group SB19 has become one of several personalities who received the Top Celebrity Award at the TikTok Awards 2021.

“We won the #TikTokAwardsPH Top Celebrity Award Trophy. Maraming salamat sa inyong suporta, A’TIN (Thank you for your support, A’TIN),” SB19 stated as it showed a poster announcing its win through its Twitter page yesterday, July 4.

A video of the group receiving their award can also be seen on TikTok Philippines’ YouTube channel, released on the same day.

(We are so honored, this is a big opportunity for us. We all know that TikTok has helped many artists now. We are very honored to be part of it.)

The group also sang their songs “MAPA” and “What?” for the awards show.

Meanwhile, TikTok Philippines announced SB19’s “well deserved” win by showing a photo of the group receiving their trophy, through the video streaming platform’s Twitter page on the same day.

Watch out for their performance in a bit 😉 https://t.co/LCDO6Jl4Qu#TikTokAwardsPH pic.twitter.com/mxt5tPrgU1

The Top Celebrity Award was also given to actresses Sanya Lopez and Andrea Brillantes, while TikTok’s Top Creator Award was given to vloggers Niana Guerrero and Ranz Kyle. JB