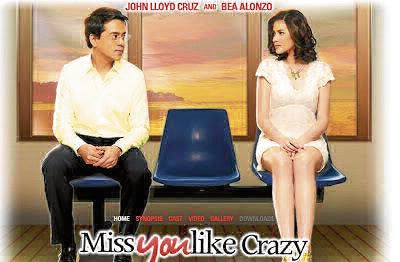 I’m ready to take up the challenge,” said actress Bea Alonzo when asked for her reaction to the possibility of doing a sequel to the romantic drama “Miss You Like Crazy” about 11 years after it was first released by Star Cinema.

The restored version of the film by Cathy Garcia-Molina—that also features John Lloyd Cruz as lead—has been streaming under the Sagip Pelikula Festival on KTX.ph since June 29.“I want to do it because after watching it again, Direk Cathy described me in that movie as ‘bubot pa,’” she told Leo Katigbak, ABS-CBN Film Restoration and Archives group head, during an hourlong pre-stream interview.

Leo had asked if they would be interested in doing a sequel to “Miss You Like Crazy,” just like the other highly successful John Lloyd-Bea teamup, “One More Chance” (2007), which had its followup eight years later, titled “A Second Chance.”

“To be honest, I want to find out what happened to the love story of Mia and Alan because they only made very few choices in the film, mostly these involved fate and destiny. It would be interesting to check on how they are now,” explained Bea. “From the moment they chose to love each other, fate and destiny already became irrelevant. When they decided to be together, this meant they also had to make important decisions in order to stay together. That would be interesting to see today.”

In “Miss You Like Crazy,” Bea plays the downtrodden Mia, who can’t seem to find a break as her family constantly falls into a crisis. John Lloyd, meanwhile, plays Alan, whose life is near perfect with a coming job promotion and a stable relationship. Their lives may be on opposite paths but a serendipitous meeting on a ferry boat ride changed their journey forever.

“I guess to be open to setting aside whatever wisdom and learnings we’ve acquired as persons [in the past 11 years] and relive these characters are what will make doing a sequel to this film more challenging,” explained John Lloyd.

“That’s actually difficult to do. The big question is, can we actually commit to being Alan and Mia again? Can we become blank canvasses once again and absorb whatever we need to absorb in order to recreate the magic we had while we were doing this? That also is quite challenging,” he pointed out.

And since he loves challenges, John Lloyd said, he would want to become Alan again. “Come to think of it, Alan made all the right choices. He may have felt afraid and uncertain that’s why he stood Mia up, but he tried to make up for that mistake. I also want to know if he still lives in that old house by the river. I want to find out, too, if he has remained true to his values,” John Lloyd said. “This is how we get into our characters. We treat them as real people—living and breathing ones. And it’s true that every so often, we’re curious and want to be them again.”

Cathy said “Miss You Like Crazy” is a movie that didn’t follow the usual Star Cinema mold. “Since we did this after doing (the box-office hit film) ‘One More Chance,’ we wanted it to be very different. Sadly, the reaction of many audiences was the opposite. They didn’t like this because they were looking for something like ‘One More Chance.’ I was glad that Star Cinema agreed to my conditions—to have a film that’s very quiet and subdued—but I paid the price. This didn’t do as well as we expected,” she recalled.

“Honestly, we set Alan and Mia aside because of the stigma of that other John Lloyd-Bea film; but I personally like this more. When I watched the restored version, I said, ‘Yes, I would want to check up on them again.’ I loved John Lloyd’s performance here the most,” she declared.

Cathy explained their toughest challenge was for the audience to not see Popoy (John Lloyd’s character in “One More Chance”) in Alan. “And it’s true; I only saw Alan! I also realized that John Lloyd is so handsome here. He looks good with eyeglasses,” said Cathy.

Cathy said that they had wanted Mia’s personality to be “light and bubbly,” an exact opposite of Bea, “who is classy, and speaks slow and with finesse.” She explained: “Grabe ang effort namin dito in terms of characterization. We wanted Mia to have a funny side, to differentiate her from Bea who we’re so used to seeing in dramatic roles. Bea really had a hard time, especially at the start. She managed to pull through eventually.”

The film’s head writer, Vanessa Valdez admitted that this was not originally intended for John Lloyd and Bea, and that their director wasn’t supposed to be Cathy, but (current managing director of ABS-CBN Film Productions Inc.) Olivia Lamasan. She added that the concept for “Miss You Like Crazy” was first formed in 2004, but the research didn’t finish until 2006. The film was shot in 2009.

“Its major difference from the original concept was that the former was supposed to be shot entirely in Malaysia. But because we needed to work on this right away, we had to revise the script so we could shoot half of it in Manila and half in Kuala Lumpur,” said Vanessa. “I didn’t know John Lloyd and Bea when we first started writing the script, but we agreed that whoever will play the couple here should already have a long history of working together. Luckily enough, when it was time to shoot the film, the two already had a long and deep cinematic and TV history.”

ABS-CBN Film Restoration and its Sagip Pelikula project continue to treasure Philippine cinema classics by restoring and remastering films from directors and writers of note for today’s viewers to appreciate. Aside from “Miss You Like Crazy,” also featured in the festival are more of John Lloyd’s films, including “One More Chance,” “In My Life,” “Dubai,” and “The Mistress.” Tickets are now available at http://bit.ly/MYLConKTX, priced at only P150. INQ