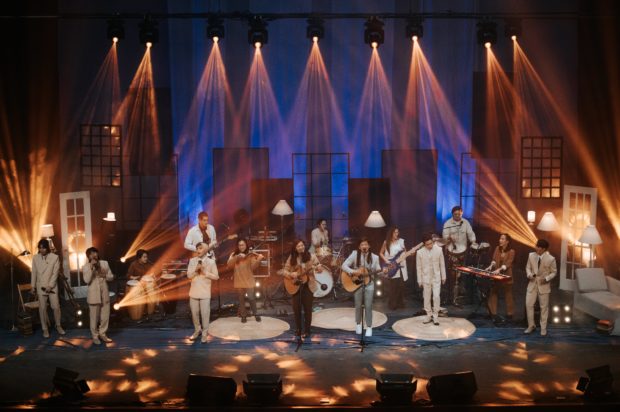 SB19 and Ben&Ben in the official video for ‘MAPA (Band Version)’. Image: Twitter/@BenAndBenMusic

Ben&Ben and SB19 have finally released the official video for their first musical collaboration, the band version of the song “MAPA.”

The folk pop act and P-pop group sang the song on a stage at the Manila Metropolitan Theater, as seen in SB19’s official YouTube channel yesterday, June 27. Members of SB19 had joint singing duties with Ben&Ben’s Paolo Guico, Miguel Guico and Toni Muñoz.

SB19 also released the official audio version of the song through music streaming channels on the same day.

Ben&Ben stated that they were “honored” to have collaborated with the P-pop group for the track, as they showed two behind-the-scenes photos on their Facebook page on Saturday, June 26. The bands can be seen sitting together in a cinema for one of the photos, while the other showed them onstage where they performed for the official video.

“‘MAPA’ by SB19 is such a beautiful song about our parents. It’s an honor to have as our first collab with them, the band version of this song,” Ben&Ben stated.

"MAPA" by SB19 is such a beautiful song about our parents. It's an honor to have as our first collab with them, the band version of this song. It will finally be out everywhere at 12mn! #SBEN19MAPA

The collaboration between the two groups entered Twitter’s Philippine trends list less than an hour since the video was released, with “SBEN19MAPA VideoRelease” taking the top spot, also yesterday.

Ben&Ben’s collaboration with SB19 comes after they partnered with Day6’s Young K for a reimagined version of their song “Leaves.” SB19, meanwhile, is set to hold their “Back in the Zone” online concert on July 18. JB