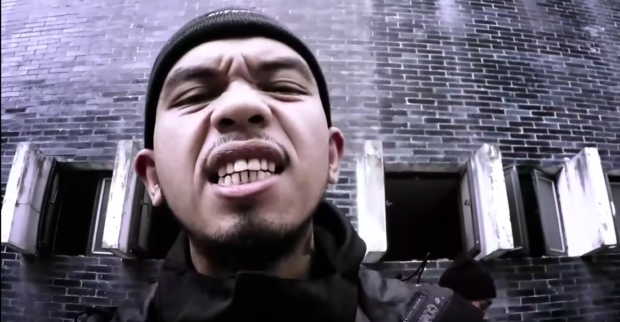 Loonie in his music video of “Ganid”. Image: screenshot from YouTube.com/@Loonie

In an order dated June 22, 2021, aside from the rapper, also cleared for violation of Republic Act 9165 specifically Section 5 for sale of illegal drugs is his sister-manager Idyll Liza Peroramas and two of their staff.

A demurrer to evidence is in effect a motion to dismiss filed by the accused after the prosecution finished its presentation of evidence. The demurrer is anchored on the ground that the evidence presented by the prosecution is insufficient.

Inconsistent testimony of the witness

In granting the demurrer to evidence by Loonie and his co-accused, the court said the “inconsistencies in the testimony of the poseur-buyer and that the details of his testimony are contrary to human experience.”

The witness said he met Loonie at a bar on Aug. 31, 2019. The rapper gave him a sim card where they will use for communication. He also presented a transcript of their SMS exchanges about the drug transaction. The witness claims he has a photo with the rapper when he was given the sim card but the photo has been deleted.

The court also took note of the coincidence that when Loonie allegedly sent an SMS to the poseur buyer, he was asked to prepare P100,000. It was the same amount prepared by the raiding team during a briefing three hours prior to Loonie’s SMS.

Aside from that, the arresting officers, based on the documents stated that they have no personal knowledge about the drug transaction and the source of the drug evidence. They said, they only witnessed the pre-arranged signal of the poseur buyer.

The court said there was an unjustified deviation from the chain of custody rule.

Chain of custody under Section 21 of the Comprehensive Dangerous Drugs Act of 2002 requires the arresting team having initial custody and control of the drugs to immediately undertake a physical inventory of the confiscated drugs and to take photographs while in the presence of the accused or the person/s from whom such items were confiscated and/or seized, or his/her representative or counsel.

The law also requires a representative from the media and the Department of Justice (DOJ) and any elected public official who shall be required to sign the copies of the inventory.

The presence of such witnesses is important to prevent allegations of planting of evidence or frame-up.

The law requires strict implementation of the process otherwise the case will be dismissed if there is no other evidence to warrant a conviction.

The rule on the chain of custody is important to make sure that the drugs presented in court is the same drugs recovered from the accused. The law requires strict implementation of the process otherwise the case will be dismissed if there is no other evidence to warrant a conviction.

“As correctly pointed out by the defense, none of the prosecution witnesses identified the drug evidence in open court as seized from the accused,” the court said.

“God knows we never sold drugs. Those shown in the media last September 2019 were all planted. It was an inhumane set-up,” Loonie’s sister Idyll said in a statement.

She added “we can refute the lies that were told in court and in media by those individuals. We have proof and we will follow due process.”

Loonie, on the other hand, thanked their lawyers “for being our partners in ending the injustice done to me and my family.”

“We offer this victory to God and to everyone who’s been supporting us through and through.”