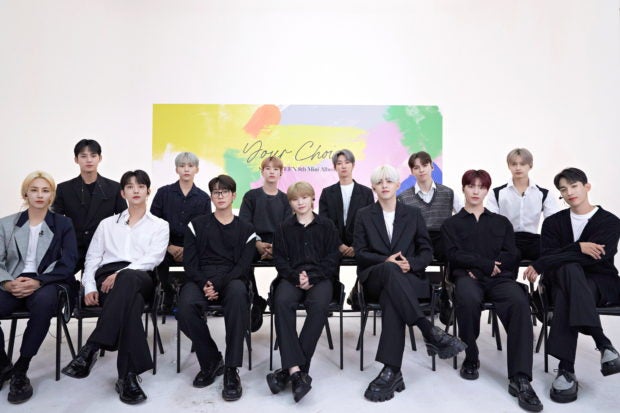 K-pop stars SEVENTEEN say their latest EP “Your Choice” and lead single “Ready to Love” show off a more mature concept and sound but the motivations behind their music remain the same.

Formed in 2015 in South Korea, the band has racked up more than 2 billion streams worldwide, and is best known for hits such as “HOME;RUN” and “Left & Right.” SEVENTEEN is riding on the smash success of two back-to-back albums last year – “;” (Semicolon) and “Heng:garae” each sold over a million copies.

“Rather than saying that we’ve matured in a specific way, we’ve just always tried to sincerely convey our most honest emotions through our music and lyrics,” said S.COUPS, rapper and leader of the group.

With 13 members and 3 units, the group produces much of their own material, from the music down to their choreography.

“I think a huge strength of SEVENTEEN’s producing is that the members have a very deep understanding of our album,” said member SEUNGKWAN, “and an even deeper affection for it.”

Group members say their fans, known as CARATs, inspire them to bring out a better album each and every time.

“We believe that we should give back as much love as we have received, so with every album, we do our best to deliver quality music and performances with a greater sense of responsibility,” said another member, MINGYU. JB