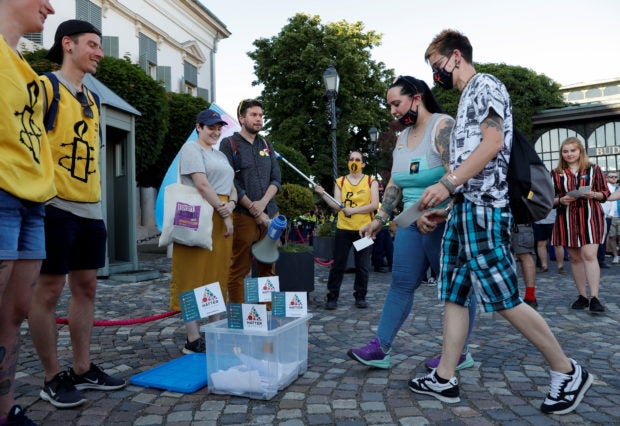 People walk to put letters in a box during a protest against a law that bans LGBTQ content in schools and media at the Presidential Palace in Budapest, Hungary, June 16, 2021. Image: Reuters/Bernadett Szabo

BUDAPEST — The largest broadcasters in Hungary criticized a new law banning the “display and promotion of homosexuality” among under-18s as a threat to freedom of expression, and one said it could impact showings of some Harry Potter films and classic TV shows.

Prime Minister Viktor Orban’s nationalist government pushed the law through parliament on Tuesday despite criticism from rights groups and the European Union, which said it could result in a loss of development funds for Hungary.

Orban and his ruling Fidesz party, which faces a tight election race next April, have increasingly railed against LGBT+ people and immigrants as part of their self-styled illiberal regime, which has deeply divided Hungarians.

Other major broadcasters including HBO, SPI International and A+E Networks joined RTL’s statement. An RTL spokesman said it would come up later with a strategy to deal with the new legislation.

The law says it aims to “defend the right of children to an identity that conforms to their birth gender,” and bans content for minors that “promotes or depicts gender change and homosexuality.” The same rules apply for advertisements.

It has further highlighted a growing rift in the EU between socially liberal western nations, where same-sex marriages are commonplace, and more conservative ex-communist countries in the east. Staunchly Catholic Poland has also clashed with Brussels over its stance on cultural issues including LGBT+ rights.

RTL said Hungary’s new law could provide grounds for banning family favorites from from prime time TV because they touch on homosexuality in some manner.

“Based on this, works like ‘Billy Elliot,’ ‘Philadelphia,’ ‘Bridget Jones’ Diary,’ or even some Harry Potter films would only be shown late at night,” RTL said. “Series like ‘Modern Family’ would be banned, as would some episodes of ‘Friends.'”

The law will cause significant harm to the media business and makes it more difficult for all Hungarians to access certain kinds of content, the broadcaster added.

The government and the Fidesz deputy who submitted the bill did not reply to Reuters’ requests for comment on the possible impact of the law on programming.

Other media companies said in the statement that they were “stepping up together to support diversity and against discrimination of the non-heterosexual community.” They did not say how they might change their programming.

In separate emailed comments to Reuters, HBO owner WarnerMedia said: “We stand against all forms of homophobia, prejudice or discrimination. The enduring power of all of our stories can open our eyes to the world, to each other and to new and different perspectives.”

Viacom and A+E spokesmen did not immediately reply to Reuters’ requests for comment. Global streaming giant Netflix, which did not join the protest, did not respond immediately to a Reuters request for comment.

“Excluding sexual minorities from mass media hinders responsible and colorful portrayals of the world” in line with the values of tolerance and acceptance,” it said in a statement.

RTL morning show anchor Mark Lakatos, who is openly gay, accused Fidesz of hypocrisy and joked that he would now “lie every morning” about being in love with a female colleague.

Critics have drawn a parallel between Hungary’s legislation and Russia’s 2013 law that bans disseminating “propaganda on non-traditional sexual relations” among young Russians.

In Turkey, radio and television watchdog RTUK assumed sweeping oversight over online content two years ago, including streaming platforms like Netflix and online news outlets, alarming rights groups who said it could lead to greater censorship of LGBT+ content. JB

Read Next
Sharon Cuneta receives second dose of COVID-19 vaccine in US
EDITORS' PICK
Malls, parks in NCR still off limits to minors even with eased restrictions
Leaked: A 60x Zoom and all-new Helio G96 mean a complete overhaul for TECNO Mobile’s new CAMON 18 series
Lacson wants DOF to suspend TRAIN law as oil prices rise
Delivering delight against all odds
Next level mobile photography within reach with vivo X70 co-engineered with ZEISS
153 protests filed vs China actions in PH waters in 2021 — DFA
MOST READ
Robredo to supporters: Be calm, gentle and do good deeds
Matibag calls Senate budget hearing ‘political,’ gets kicked out
Drilon: Tax and then ban Chinese firm in pandemic funds mess
Colmenares denies Makabayan is supporting Pacquiao
Don't miss out on the latest news and information.