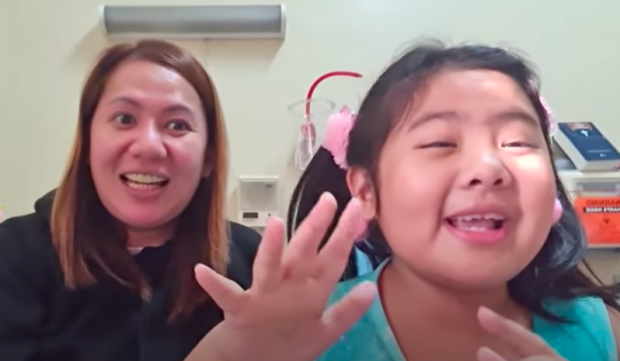 Radio DJ Nicole Hyala and her husband could not help but be emotional as they disclosed to fans their 8-year-old daughter’s near-death battle against a brain condition.

The DJ, whose real name is Emmylou Gaite-Tiñana, disclosed Princess’s battle with viral encephalitis via a YouTube video on Jan. 6.

Hyala recalled that their daughter in April was hospitalized by the said condition, which they at first taught was just fever at first.

The radio personality noted that despite it being a painful story, her daughter’s struggle and survival against viral encephalitis is a testament to “God’s love and miracle.”

Hyala shared that in mid-April, Princess developed a fever and was rushed to the Biñan Doctors’ Hospital.

Both parents noted that they noticed that their daughter, who is usually energetic, was sleeping more and more, which they found strange.

The couple then had Princess be checked by a neuro-pediatrician as she was not getting better, which is when they found out that she had viral encephalitis.

“Syempre nagulat kami kasi akala namin lagnat lang, ‘yun pala brain inflammation,” an emotional Hyala recalled. (Of course, we initially thought that it was just a fever, but it turned out to be brain inflammation.)

Princess was eventually transferred to the intensive care unit (ICU) at St. Luke’s Hospital as her condition worsened, the parents shared.

“It was very painful to see her there and ang pinakamasaklap, wala namang way para magbantay sa loob ng ICU so on that very first night that she was transferred to St. Luke’s, iniwan namin siya, ” Hyala emphasized.

(It was very painful to see her there and what hurt most was that there was no way we could be with her in the ICU, so on that very first night she was transferred to St. Luke’s, we had to leave her there.)

Princess spent three weeks confined in the ICU without seeing her parents face to face. They would only get updates from the hospital on her condition.

Despite the painful situation, the father meanwhile noted that they are still blessed by God as He made it a little easier for them to deal with the situation by allowing other people to help them.

“Grabe ‘yung pagkapit namin sa Diyos. Hindi namin siguro maitatawid ‘yung mga minuto at ‘yung mga araw kung hindi kami nagdadasal,” Hyala said. (We relied on God so much. I think we would not have been able to survive the minutes and days if we were not praying.)

Hyala added that this was also the time that they have been “closest to God.”

The DJ admitted having a “moment of surrender” one day when Princess was already out of the ICU but still confined in the hospital’s regular room.

(I went to the far end of the room, I cried and cried and said, “Lord, why are you doing this to me, you are not listening to me… I pray every day for you to return Princess to me.)

A day after, the previously agitated and restless Princess suddenly began calming down and recovering. “God gave us a miracle,” Hyala said.

In the end, the couple credited Princess’s recovery not only to the health workers but also to God, whom they said even prepared them financially as they were able to get an insurance card just before Princess had the brain condition.

A smiling Princess then joined the Hyala near the video to thank those who prayed for her. She is still undergoing physical therapy, occupational therapy, and speech therapy, according to the parents.