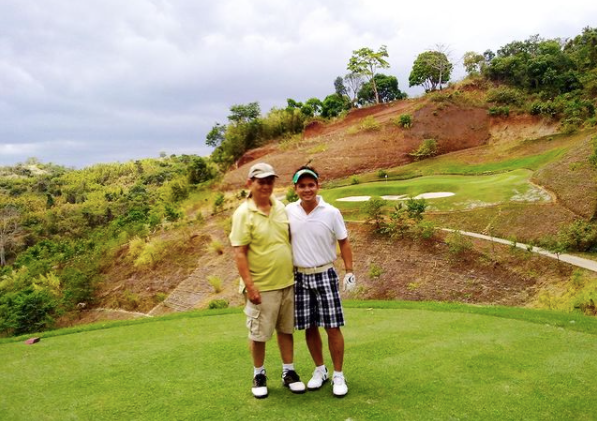 “This was dad and [I] at the [Sun Valley] golf course in 2010,” Alcasid said on Instagram yesterday, June 7, as he showed a photo of them at the picturesque golf course in Antipolo.

“Dad was 76 years old then. He was still very strong and had a real sharp short game,” recalled the OPM icon, who is a known lover of the sport.

“Dad would have been ecstatic knowing that our very own Yuka Saso has historically won the [U.S. Open] for our country,” he added.

The 19-year-old Saso, who is Filipino-Japanese, made history by being the first Filipino player to win the U.S. Women’s Open. She also tied South Korea’s Park Imbee to the day as the youngest champion at 19 years, 11 months and 17 days.

With the Filipina champ’s achievement in the sport, Alcasid could not help but think that his father “would have been so proud of her,” although he noted that he is “sure he had a gallery seat in heaven.”

Alcasid was also among the first local celebrities who celebrated Saso’s win through social media.

“[Yuka Saso] of the Philippines [Philippine flag emoji] is the new LPGA [U.S. Open] champion. History. #pinoy #filipino #golf #philippinegolf,” he said on Instagram yesterday, sharing a video of Saso during the tournament.

“We have a new sports hero!! @yukasaso_official congratulations!!” Alcasid said in the following post, which meanwhile came with a video of the golf champ claiming her trophy.

Alcasid announced the death of his father back in September 2020. Herminio was a lawyer and former president and chief executive officer of the Philippine National Oil Development and Management Corporation. JB