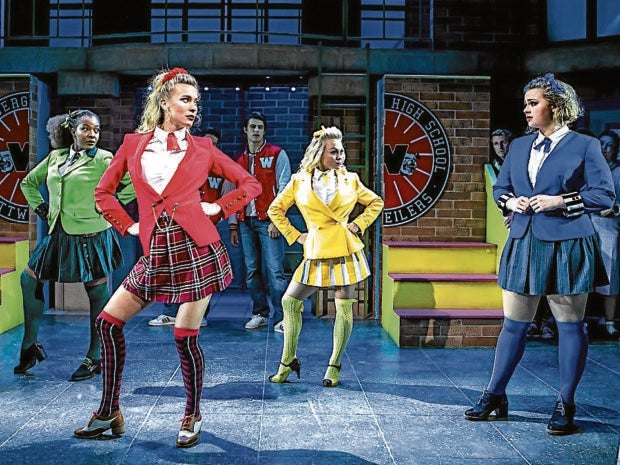 We knew it was just a matter of time before his latest career milestone would happen, pandemic or no pandemic. And we’re even more thrilled that actor-filmmaker Joaquin Pedro Valdes has managed to hurdle casting odds at a time when Filipino theater fans are in dire need of another inspiration—this time, in the form of a homegrown thespian they can aspire to be.

After joining the touring productions of “Miss Saigon” and “The King and I,” Joaquin made his mark playing John Safford Fiske in the hit fringe musical “Fanny and Stella,” the first production to open (in August) in London since the first lockdown on March 23 last year.

On June 21, Joaquin embarks on another first: He is set to make his West End debut in “Heathers: The Musical”—as part of its principal cast!

In a masterstroke of colorblind casting, Joaquin has been assigned a role traditionally given to Caucasian actors. He plays Ram Sweeney, one of the dreamy jocks in the latest incarnation of Kevin Murphy and Laurence O’Keefe’s rock musical based on the black-comedy movie that starred Winona Ryder, Christian Slater and Shannen Doherty in 1988.

Directed by Andy Fickman with choreography by Gary Lloyd, the musical will be staged at the Theatre Royal Haymarket from June 21 to Sept. 11 and will tackle pertinent themes that are as relevant now as it was 33 years ago: bullying, teen suicide, sexual assault and school violence.

So you can imagine how thrilled we were when Joaqs, whom we directed in 2007’s “Into the Woods” (where he played Jack) and 2009’s “The Male Voice,” broke the happy news to us two weeks ago, long before the official cast announcement was released last weekend.

You can describe Joaquin’s stint with “Heathers” “almost providential.” In fact, he first auditioned for its UK tour, and didn’t make the cut. But, we’re getting ahead of ourself here, so let’s backtrack.

“The stage musical is based on the ’80s film that was popular in the States, even before ‘Mean Girls’ came along,” Joaquin explained. “So it was no surprise that it also developed a cult following off-Broadway.

“Then, in 2018, it transferred to the West End starring Carrie Hope Fletcher (as Veronica Sawyer) as it continued to develop the show and added new songs (“I Say No” and “Never Shut Up Again,” among them). So, the London staging is the musical’s most exhaustive version.

“At the latter part of 2020, during the pandemic, there were talks of a UK tour. I was asked to submit a self-tape because there were no in-person auditions then. I made it all the way to the final callback, but didn’t make the cut. So I said, ‘OK, that’s part of life.’ They didn’t announce the dates for the UK tour because everything was still up in the air because of the lockdowns. 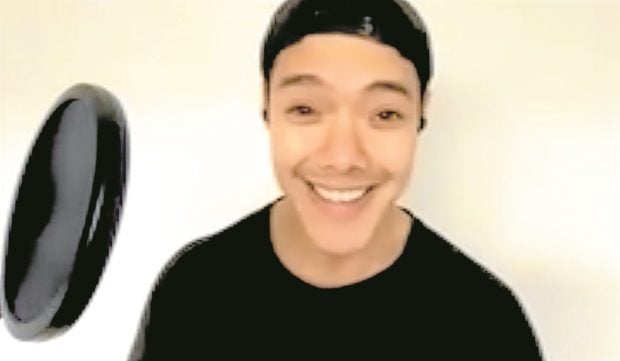 “By the start of 2021, things started to get hopeful for the theater industry here. April 12 was a big deal for us because that’s when the lockdown started to ease up as part of the government’s five-phase process. There’s a turnaround every five weeks.

“The next big date was May 17, when theaters began to open, but only for ‘socially distanced’ seating—this includes the musical ‘Six.’ Another crucial date is June 21, considered a big day for theaters, where they can already accommodate indoor, full-capacity audiences.

“So, the concert version of ‘Les Miserables’ is already going to open soon. But its main staging, as well as those of ‘Phantom of the Opera,’ ‘Hamilton,’ ‘Frozen’ are all set to open in July and onwards, because that’s the guideline.

“After they announced the cast of ‘Heathers’ UK tour, they made a surprise announcement that the musical would separately be coming back to the West End. When I was asked to submit another self-tape for it, I didn’t have high hopes for it because I didn’t even make it to the UK tour. 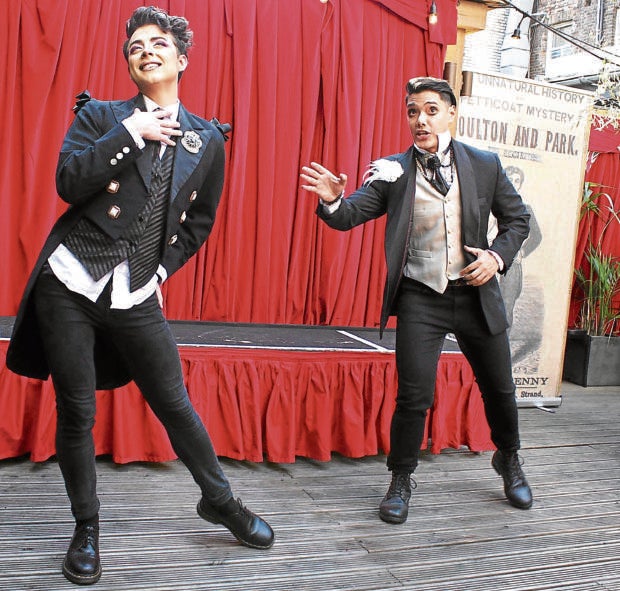 Valdes (right) with Jed Berry in “Fanny and Stella”

“I didn’t hear from them for so long, until my agent called me one Sunday to be ‘on standby,’ but my focus was somewhere else because I was also in the final auditions for another huge musical that was casting its leads. So I was really surprised when my agent told me that I booked ‘Heathers’—it’s my West End debut!”

Joaquin’s rehearsals for “Heathers” will start on June 7.

Here are excerpts from our exclusive Q&A with Joaquin on Zoom:

You’ve done a number of shows in the United Kingdom over a relatively short period of time—“Miss Saigon,” “King and I,” “Fanny and Stella” and you were even supposed to act in “Evita” at some point. What makes “Heathers” significant for you?

What excites me the most about this is that I’m going into a role that was originated by someone who doesn’t look like me—someone who’s white. And the fact that I got cast says a lot about how theater is progressing in terms of colorblind or gender-bender casting.

Things are changing now and we’re breaking stereotypes. And this particular character, Ram Sweeney, is a football jock, a linebacker. He’s a horn dog and a hypersexualized man—which is of course a stereotype in itself. But it’s a character that is, by tradition, never given to an Asian actor.

I have fond memories of the film but I’ve never seen the musical. How different is the 1988 movie from the script you’ve read?

It’s not very different. I think the original writer also participated in writing the musical, so many of the catchphrases and references from the ’80s film are still there—and it really embraces the cult following of the film version. It’s really crazy and so much fun. They just modified some character arcs, particularly for my character and the other football player. And the songs are amazing!

How does Ram’s character resonate with you? Any similarities?

I’m still trying to discover him, but I’ve always been interested in looking for a clown persona. There’s a school in Paris that allows an actor to discover his clown persona. And for a clown to be funny, it needs to be grounded in some sort of reality that extends into your physicality and expressions. It’s a tough process, because you really need to dig deep into your most vulnerable side to expose that. 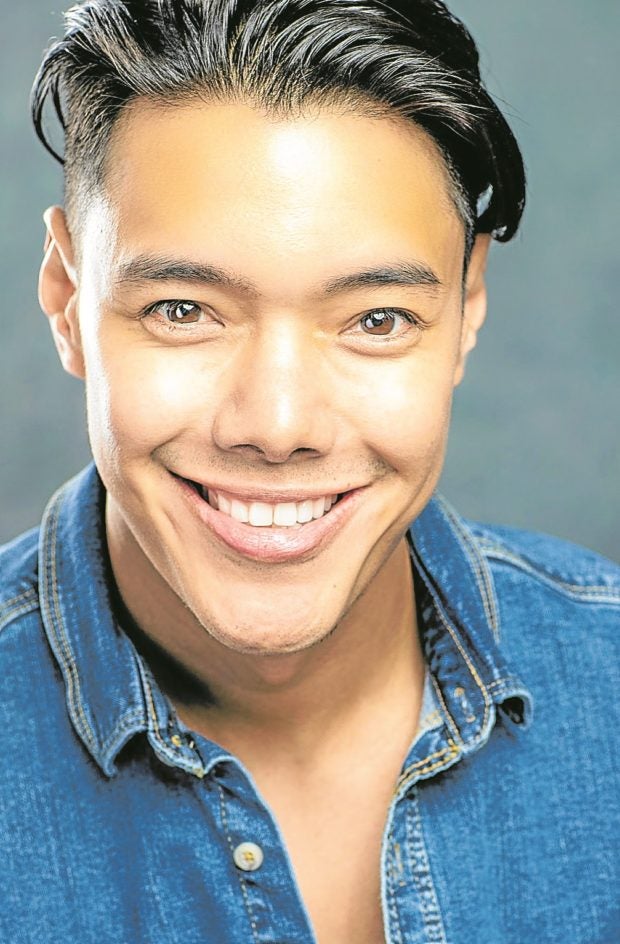 Mr. Wormwood, my character in “Matilda, The Musical,” is an example of a clown persona. But I think my real clown persona, which has been consistent with some of the roles I’ve been taking, is this the dumb jock—like my character Spike in “Vanya and Sonia and Masha and Spike” (for Repertory Philippines), as Jack in “Into the Woods” (for New Voice Company) and as Chinito in “Ako si Josephine” (for Peta).

You don’t know if they have issues with their masculinity (laughs). I found that when playing Ram Sweeney, there’s also that [issue]—this tough guy is macho on the exterior but is really empty or stupid inside. So, that’s one aspect of this character.

“Fanny and Stella” had an SRO run last year and was extended a couple of times. What did you learn from it?

I learned not to take things for granted, that there are no big or small shows, that any opportunity to do what you love—especially in 2020, when there was almost zero opportunity—is a big opportunity.

So, it’s not about the scale or reach of the show. I should consider myself blessed and very lucky to be able to do what I love for a living because it can be taken away just like that for whatever reason.

“Fanny” taught me to be grateful for every opportunity to do what I love because it brought joy to people who were willing to spend their hard-earned money to sit outside in a cold pub to watch a show. It’s very humbling.

I’m sure establishing yourself in the United Kingdom hasn’t been easy because you had to start from scratch, literally. In Manila, all the characters assigned to you were nothing but lead roles. How did you make that adjustment?

(Laughs) It’s a privilege I let go of a long time ago, because everyone here is exceptional. Ang huhusay ng mga tao dito! So, you either get intimidated by it and curl up into the shadows or you rise to the occasion and find ways to just get better.

So, during the long lull last year, that’s what I focused on: I took acting classes, learned more about the Meisner technique, and enrolled in combat classes to make myself more competitive. That would make me, as they’d say, a “match fit” and competitive during auditions. You have to invest enough time and energy in developing your instrument as an actor. INQ