Alex Gonzaga fangirls over Ariana Grande wedding by comparing it to hers, gets flak | Inquirer Entertainment
Close
menu
search

Alex Gonzaga fangirls over Ariana Grande wedding by comparing it to hers, gets flak 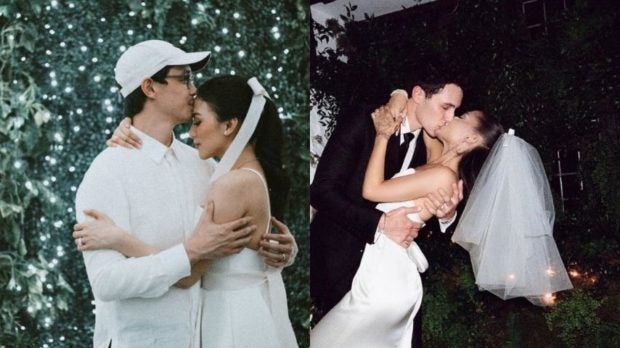 Netizens did not take it kindly when Alex Gonzaga took to Twitter last Thursday, May 27, to express excitement towards American pop star Ariana Grande tying the knot with real estate agent Dalton Gomez.

The actress-host placed her wedding photo with husband Mikee Morada side-by-side with Grande’s, saying they got married “the same way.”

It could be recalled that the “thank u, next” singer married Gomez in an intimate ceremony in her Montecito home, which was announced by her representative through TMZ on May 17.

Likewise, Gonzaga and Morada held an intimate wedding of their own in November 2020, in the former’s family home in Taytay, Rizal. Gonzaga revealed this in her vlog last January.

“When your lodi marries the same way as you… AG from the east and west ftw! mars it’s a tie!! (emoji),” she said, before tagging Grande’s official Twitter account.

When your lodi marries the same way as you… AG from the east and west ftw! mars it’s a tie!!😬 @ArianaGrande pic.twitter.com/PYExgsOVK6

Some netizens did not take her tweet lightly, with one asking what is the connection between her wedding and Grande’s.

“Intimate wedding at home. Gets?” Gonzaga replied back.

Intimate wedding at home . Gets?

“Kasal ng iba, ginawa [niyang] tungkol sa sarili [niya]? Anong ‘di mo maintindihan [doon]?” one @zsorryy answered back to the fan. (It’s somebody else’s wedding and she made it about herself? What can’t you understand there?)

“Can’t she let Ari have her own spotlight without including herself in the picture? The universe doesn’t revolve around one person?” the netizen added

(You’re so funny. You think with this tweet, I stole the spotlight from Ariana!? Are you serious? [Laughs] I talked to Ariana. She’s okay and happy and busy with her married life. She did not get affected by my tweet because this is just me fangirling. Sorry, you and Ariana are probably friends.)

Gonzaga and Morada are planning to have a bigger wedding “by God’s grace” this year. JB