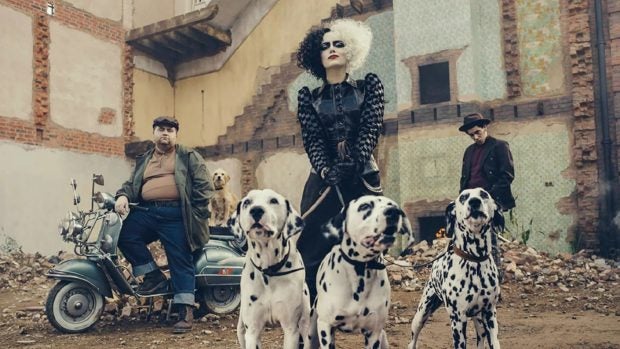 Pitting one of its most memorable villains against a fearsome new foe, Disney’s devilishly fashionable “Cruella” is one of the studio’s darkest movies yet, according to star Emma Stone.

The live-action “101 Dalmatians” origin story, out Friday, is set in a Vivienne Westwood punk-inspired London world, complete with a 1970s rock-influenced soundtrack and all manner of Afghan coats, maxi skirts and wet-look boots.

Stone plays a young Cruella De Vil, whose rebellious streak has not yet reached the point of skinning Dalmatians in the name of haute couture.

An ambitious, upstart designer, Cruella quickly crosses paths with the formidable Baroness von Hellman, played by Emma Thompson, who thinks nothing of using her power, influence and even violence to crush youthful pretenders to her fashion empire.

“I spent decades playing what my mother used to call ‘good women in frocks,'” Thompson told a virtual press conference. “Now I got to play an evil woman, in frocks. But oh boy, the frocks.”

Lavish costumes not only provide on-screen flair, but also chart Cruella’s transformation through the movie, from rebellious schoolgirl to a bitter rival bent on sabotaging the Baroness’s imperious designs.

“It was just phenomenal. I mean, nothing you would ever be able to even remotely wear in real life,” said Stone. “That really is the moment where you’re like, ‘I am in a movie right now… this is never happening in reality.'”

Double Oscar-winner Thompson, known for her work from “Sense and Sensibility” to the “Harry Potter” films, told journalists she had been “asking for quite a number of years” to play a villain.

“I am very interested in the dark side of female characters, because they’re so rarely allowed to be dark,” she said. “We’re all supposed to be nice and good, aren’t we?”

“It’s definitely dark for a Disney movie,” added Stone, who is also an executive producer alongside a former Cruella, Glenn Close.

“It was darker than I’ve seen a Disney movie for a long time.”

Asked about her real-life inspirations for the character, Thompson explained that while “my experience of people who are truly mean and hardened and narcissistic is quite rare… there are quite a number of them in show business.”

“Mentioning no names, but… some of those people have come to light recently,” added Thompson, an outspoken activist on causes including the #MeToo movement that continues to rock Hollywood and the entertainment industry worldwide.

Thompson was praised at the start of the #MeToo movement for slamming the sex crimes of Hollywood mogul Harvey Weinstein as part of “the crisis of extreme masculinity.”

She publicly withdrew from animated film “Luck” in 2019 after its studio hired former Pixar boss John Lasseter, who is accused of sexual harassment.

“Cruella” does not stray into subjects such as sexual abuse, and contains plenty of humor thanks to Paul Walter Hauser and Joel Fry’s turns as the film’s protagonist’s gruff, odd-couple henchmen.

But along with its depiction of a take-no-prisoners fashion world packed with vanity, jealousy and snobbery, there are plenty of moments to frighten younger viewers.

Even the Dalmatians themselves have a menacing edge.

The real dogs on set were “very sweet,” said Thompson, but were given computer-generated snarls in post-production to make them “a bit nasty.”

“Cruella” hits theaters and Disney+ on May 28. JB