WATCH: Brie Larson takes on Rosé’s ‘On the Ground’ with acoustic cover 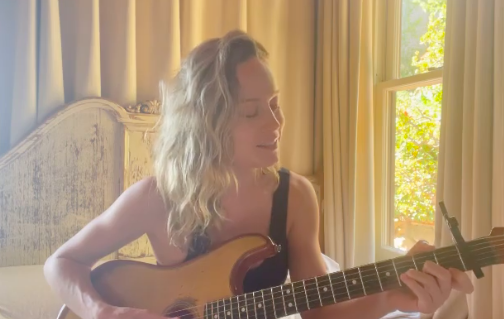 Academy Award winner Brie Larson has treated fans with a cover of “On the Ground” from the latest album of K-pop star Rosé of the girl group Blackpink.

The “Captain Marvel” star posted her acoustic cover, which she seemingly did in her own room, via her social media pages yesterday, May 11.

“A little [Rosé] magic for you,” said Larson, who effortlessly sang around 45 seconds from “On the Ground” while strumming a guitar.

While she may have been focused on acting in recent years, Larson is also known for having launched a pop-punk music career in her teenage years. She released her debut and only album, “Finally out of P.E.,” back in 2005.

“On the Ground” is part of Rosé’s solo album “R,” which was released in March. With the said album, Rosé earned two Guinness World Records (GWR) titles.

The music video for “On the Ground” was certified as the most-watched YouTube music video in its first 24 hours of release by a solo K-pop artist with 41.6 million views, according to the GWR website. Rosé was also hailed as the first artist to top the Billboard Global chart both as a solo artist and as a group act.  /ra